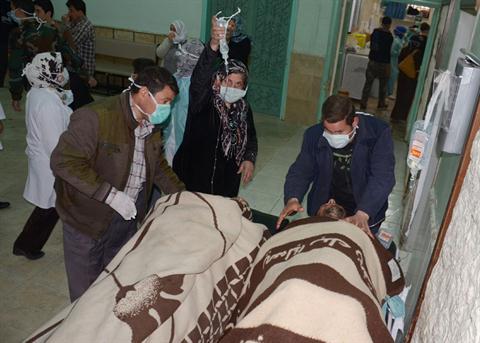 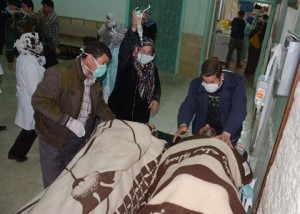 Syrian victims who suffered an alleged chemical attack at Khan al-Assal village according to SANA, are covered by blankets as they receive treatment, at a hospital in Aleppo, Syria, Tuesday March 19, 2013. (AP Photo/SANA)

TEHRAN: Iran on Wednesday accused “armed opposition groups” in Syria of having used chemical weapons on the city of Aleppo, warning against a recurrence of such attacks, the official IRNA news agency reported.

“Responsibility if there is a recurrence of such crimes will also fall on countries supporting” the rebels, he added.

Syrian officials and media said 31 people had been killed in the attack, and that around 100 more were injured.

Syria and the rebels on Tuesday accused each other of using chemical weapons for the first time since an uprising against the regime of President Bashar al-Assad began in March 2011.

Iran staunchly supports Assad, and regards many Syrian opposition groups as “terrorists” being backed by Western and Arab countries.

Russia, another Assad ally, said it had “information” from Damascus that rebels had used chemical weapons, but White House spokesman Jay Carney said the United States had “no evidence to substantiate the charge.”

UN Secretary General Ban Ki-moon on Tuesday warned that the use of chemical weapons by any party in Syria would “constitute an outrageous crime.”