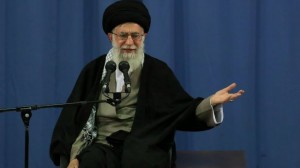 eader of the Islamic Revolution Ayatollah Seyyed Ali Khamenei says enemies of Iran have failed to isolate the Islamic Republic despite their strenuous efforts to do so.

In a message marking the beginning of the Persian New Year, which was designated by the Leader as the ‘Year of Political and Economic Epic’, Ayatollah Khamenei said the enemies were defeated in their attempts to paralyze Iran by imposing economic sanctions in the last Iranian calendar year which ended on Wednesday.

“In the political field, they sought, on the one hand, to isolate the Iranian nation, and on the other hand, to make the Iranian nation perplexed and doubtful [about pursuing its goals], and undermine their determination. But in practice, exactly the contrary has occurred,” stated Ayatollah Khamenei.

The Leader said that in the economic field, the enemies explicitly announced that they intended to cripple the Iranian nation through sanctions.“However, they failed to paralyze the Iranian nation and, thanks to God, we have made huge achievements in different sectors,” Ayatollah Khamenei noted.The Leader further stated that the enemies also failed to stall Iran’s “international and regional policies,” adding that Iran’s hosting of a summit of the Non-Aligned Movement (NAM) in 2012 proved that the Islamic Republic is not isolated and is respected across the world.Ayatollah Khamenei called on people to turn out massively in the forthcoming presidential election in June to determine a “good future” for their country.The Islamic Republic’s eleventh presidential election will be held in June and presidential hopefuls will register from May 7 to May 11.

The president of Iran is elected for a four-year term through a national election. The country’s Guardian Council vets the candidates for qualifications.