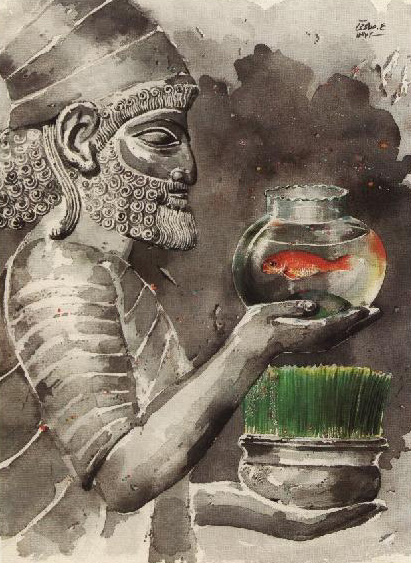 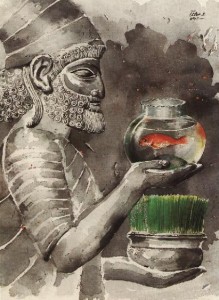 Nowruz, “New Day”, is the holiest and most joyful festival of the Zoroastrian year and the most important national festival for all Iranians. Its celebration is recorded from the Achaemenian period around 500 BCE. The name Nowruz first appears in Pahlavi texts from the Sasanian period, as nōg rōz. It is a celebration of spring equinox, when the sun begins to regain strength and there is a renewal of growth in nature.  Zoroastrians believed in the existence of a cognitive spirit, mainyu in all things, tangible or intangible. So the return of spring represented an annual victory for the Spirit of the sun. They also believed that the struggle between good and evil would end in total victory for the good. In the beginning Ahura Mazda created a perfect world that was disturbed by the evil spirit Ahriman. The “limited time” of conflict humans have now; will be succeeded by the “Time of Long Dominion” (virtually eternity), when the world will be restored to the perfect state in which Ahura Mazda created it. Therefore, traditional spring festival also represented the “New Day” or the “New Era” a reminder of the time, which will finally bring everlasting bliss, ends all conflicts and culminates with the victory of Good over Evil.

Which day it started and the number of days it was celebrated was closely related to the calendar of the period. Persians adopted a 365-day calendar similar to the Egyptian one, after Cambyses’ conquest of Egypt in 525 BCE. After the Xerxes (486-465) calendar reform, the Persians continued using their devotional religious calendar of 360-day to correctly observe the feasts of obligation, particularly the six feasts assigned to the six creations that were represented by the six Amesha Spenta (Holy Immortals). The six with the feast dedicated to Ahura Mazda formed a heptad representing the first seven creations, sky, water, earth, first plant, first animal, first human and fire/sun together. The Holy Immortals protected six of the creations and Ahura Mazda was the protector of fire/sun. The symbols of the seven creations and their protectors still can be seen in the Haft Sin spread.

The sixth feast, celebrating humankind was a very important one. It included the major feast, Hamaspatmaedaya, which in turn was linked to the Fravashis Night, preceding Nowruz. This was a celebration where the souls of the dead ancestors were celebrated and remembered. The tradition of visiting the graves of the dead relatives before Nowruz amongst many modern Iranians is a continuation of the ancient remembrance. It was believed that the dead spirits will come back to visit their old homes and relatives. For this night fires were lit to indicate to the dead that people were ready to receive them. Gradually this became a very elaborate 10-day festival before Nowruz, known as Suri Festival, complete with bon fires, prayers, feasts, music and a character described by Abu Rayhan Biruni as Piruz, the Guardian Angle protector of the dead spirits. We know this character as Haji Firuz and the black face indicates its connection to the world of the dead.

The presence of two sets of calendars led to duplicating many festivals including Nowruz, which was celebrated twice, one as religious Nowruz, and its time of celebration, based on a 360-day calendar, changed every year. The main Nowruz remained and was celebrated from the first day of the first month, now known as Farvardin for six days. The six of Farvardin was also believed to be the birthday of Zoroaster, and this day was the most important day of the celebrations. Achaemenians celebrated the New Year with grandeur at Persepolis. The kings received ambassadors and presents from all nations under their control. The images of gift bearing representatives at Persepolis represent part of these celebrations.

Nowruz continued under the Parthians. Written records from the first century BCE, from the ancient Parthian fort at Nisa in modern Turkmenistan, refer to the occasion in their calendars. The earliest description of Nowruz festivities comes from the romantic epic Vis & Ramin that is dated to have been originally from the Parthian period, although composed in the 11th century by Fahkr Al-din Asad Gorgani. He describes the royal banquet that is held in the open, under blossoming trees, and wine flows freely to the sound of minstrelsy and birdsong. Ordinary people are also celebrating out of doors, in fields and gardens, with wine and music, some racing their horses, others dancing or picking flowers; and in the days that follow the King rides out, magnificently attended, and distributes presents.

There are many references to Nowruz in Sasanian times. The book Bundahshn (Foundation of Creation), describing the creation myth of the Sasanian period refers to Nowruz as the day the cycle of life started. According to this text when Ahura Mazda created the first seven creations and their protectors the Amesha Spenta, his perfect world existed in spirit only and did not have a material form. When Ahriman saw the light coming from this perfect world, he attached the good world. In order to combat the forces of evil, Ahura Mazda, created the material world, and in order to increase the number of his forces he sacrificed the first plant, animal and human and from this act came all the living beings on earth. After the sacrifice the sun and the moon that had stood still, moved and there was day and night and seasons, this day when the cycle of life started was called Nowruz.

In another Zoroastrian text, Zadspram, it is mentioned that a sense of renewal was characteristic of Nowruz. New clothes were worn and food was of the new season. The day began with a mouthful of pure fresh milk and fresh cheese. The kings took it as a blessing and ate white sugar with fresh Indian nuts. It was a custom to sow seven seeds a few days before to let it come up fresh and green on the holy day. The celebrations at the time of Sasanians started 10 days prior to the New Year, when spring cleaning was done and the Suri Festival celebrated the dead ancestors with bon fires, music, prayers and feasts. The whole festival lasted for 21 days.

The most detailed account on Nowruz after Islam is by Abu Rayhan Biruni who also discusses Zoroastrian calendar in detail. He mentions a few legends about Nowruz being associated with Jam or Jamshid a legendary king in Shahnameh. He describes people giving each other sugar, and celebrated by eating and drinking, playing musical instruments and giving themselves over entirely to amusement and pleasures. Biruni also mentions the custom of growing seven kinds of grain around a plate.

In one book whose author is unknown, Ketab al-mahasen wa’l- az dad, it is said, there was placed before the King after his rising a table on which were twigs of 7 kinds of trees, and 7 white earthenware plates, and 7 white dirhams of the year’s coinage.  The king started the day with white sugar, with freshly pared nuts; and pure fresh milk. Well before Nowruz different kinds of seeds were sown in separate containers, and on the 6th day of Nowruz what had grown was cut with songs and music and mirth.  Presents were given to the King, from magnificent ones from foreign rulers down to humble gifts from lowly subjects, all of which were listed by a scribe, with presents given to each in return.

Nowruz in modern times is celebrated differently amongst the Zoroastrians and the Moslem Iranians. Mainstream Iranians celebrate Nowruz for 13 days. House cleaning is done and new clothes are worn. Chaharshanbeh Suri is celebrated by jumping over bon fires while reciting short verses wishing their problems to be over and they gain the brilliance of fire. This is a purification rite and is a very popular aspect of Nowruz celebrations. Haji Firuz, dressed in red with black face appears a few days before the event and they sing and dance publically all over the country. Families gather around the ceremonial spread known as Haft Sin (seven s), although there are more than seven items on the spread and many do not start with the letter s. The celebrations start at the exact moment the spring equinox starts, so it varies every year. After the New Year is announced on TV or radio, people visit their elderly and friends, and presents are exchanged.

There is no mention of the word Haft Sin in literature prior to the 19th century, although Hast Chin or seven crops is mentioned in post-Islamic literature. In ancient times the seven corresponded to the seven creations and their protectors Amesha Spenta. The obligatory items shared by all Iranians are sabza; wheat or barley, and sometimes lentils grown to the height of a few inches.Sepand (esfand); seeds of wild rue placed in a small incense burner and burned just after the turn of the year. Sib (apples), senjed; fruit of jujube, sekka; a few newly minted coins, sir; garlic cloves, serka;vinegar (wine in pre-Islamic times), the herb somaq; sumac and a bowl of samanu; a paste made with wheat believed to improve fertility. Sonbol; hyacinth, candles, a mirror, live gold fish in a jar of water, colored boiled eggs, sweets and holy books or books of poetry are also placed on the spread. If one looks closely all the first seven creations people (egg) plants, fire, earth, sky (mirror) are present on the spread. The gold fish represents the animal world and karamahi, a mythical fish in a mythical ocean fighting forces of evil in the early battles. Today the Haft Sin for Iranians symbolizes, health, wealth, joy and fertility, renewal, and respect for nature. For modern Iranians Nowruz is a celebration of life.

Nowruz ends on the 13th day, when all Iranians spend the day outdoors for a very festive picnic. This day in the Zoroastrian calendar is devoted to the deity Tishtrya (Tir) the protector of rain. In the past this deity was celebrated on this day. The act of throwing away the sabza from Haft Sin into rivers and running waters was part of venerating Tishtrya by making offerings and throwing flowers and plants into the rivers. Modern Iranians spend the day outdoors with food, music and dancing and pay their own homage to nature.