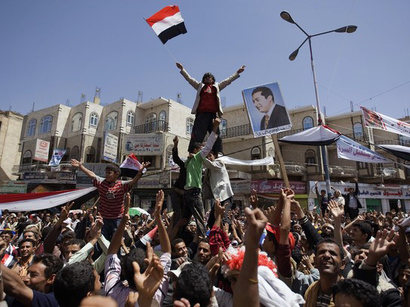 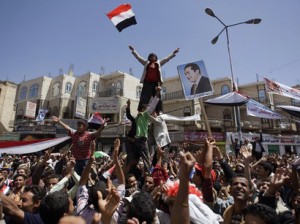 Sana’a, Asharq Al-Awsat—Yemen’s Southern Movement has received no support from Iran and remains opposed to the use of violence, according to a senior figure within the coalition.

Charges that Iran is supporting pro-secession groups in Yemen have received more attention in recent days, especially those focusing on alleged links between Iran and the group led by Yemen’s former vice–president Ali Salim Al-Bid.

Salah Al-Shanfarah, the first deputy head of the Peaceful Movement for the Liberation of the South, said that the Southern Movement remained committed to “the peaceful struggle,” despite the increasingly chaotic situation in the country since the end of February.

He also said that the allegations against Al-Bid and his party were “a fabrication.”

Shanfarah told Asharq Al-Awsat that the movement had nothing to do with the Iranian regime “from far or near, and if there is something that we do not know, then we are not concerned about it,” adding: “our struggle is a peaceful and civilized one and we do not have any links with the extremists from any trend. Our path is clear.”

Shanfarah said that the activists of the Southern Movement have been victims of repression since the previous government was in power, which he described as “an occupation regime.” He also said that the recent violent incidents in southern Yemen during the celebrations of the first anniversary of the election of President Abd Rabbo Mansour Hadi in February had led to the deaths of 25 Southern Movement activists and the injury of 115 more “without a single bullet being fired by us, and we do not have an armed struggle and the world knows this.”

The Southern Movement, which is led by former Yemeni Vice–President Ali Salim al-Bid, has been accused by its opponents of receiving funds from the Iranian intelligence services, in coordination with Houthi rebels in the rugged mountainous north of Yemen.

Answering a question on how far the Supreme Council of the Peaceful Southern Mobility, led by Hasan Ahmad Ba’um is linked to Al-Bid, Shanfarah told Asharq Al-Awsat that there is a group that has “defected from the conference, which was held by the Supreme Council of the Southern Movement in Aden, and we do not know the truth about the relationship of this defecting group with Iran or any other side.”

He added: “We are being killed and all forms of violence are used against us, and we call on the international community and ask it to look at the truth of what is going on in the south, and that we should not be wiped out under these pretexts or justifications.”

Shanfarah claimed that the number of Southern Movement members killed since its launch in southern Yemen in 2007 is now 2,113, with between 12,000 and 13,000 wounded. He also stressed that the Yemeni authorities have arrested more than 100, with dozens still in jail.

He added that the Movement does not have the funds to treat the wounded and it depends on the donations of the citizens in the south for medical treatment, and each citizen pays about YER 100, or less than half a US cent.

Within the same context, Sayf Hasan, head of the Political Development Forum and prominent political analyst in Yemen, said that “there are parties which are not Yemeni and not local which speak about Iran’s involvement in supporting the Southern Movement, but these are political messages directed towards the region and not to Yemen, and whenever the talk increases the situation in the south becomes more complicated because the southerner’s position is derived from their own views and not from Iranian assistance.”

In a statement to Asharq Al-Awsat, Sayf Hasan said that Al-Bid does not need “international support to carry out political activities, but he needs the acquiescence of the Lebanese state or influential forces in the Lebanese arena in order to stay in Lebanon and practice his political activities there.” On the issue of the funds that finance Al-Bid’s activities and the factions affiliated with him in southern Yemen, Sayf said that they are paid by some traders and Yemenis abroad and among, but there was no strong evidence of Iranian interference.

Questioned about the possibility that the Southern Movement to escalate their activities with the approaching date of convening the National Dialogue Conference, scheduled to be held on 18 March and in which the most prominent opposition southern forces refuse to participate, Sayf said that most people were optimistic about the authorities ability to maintain order.

However, while he said that it was unlikely that the conference would not begin as scheduled, he warned that the results would probably be “modest.”