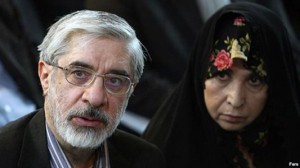 Imprisoned Iranian opposition leader Mir Hossein Mousavi has been allowed to meet with two of his daughters for the first time after four months.

According to opposition site Kaleme, on Wednesday, Mousavi and wife Zahra Rahnavard met with their daughters Narges and Kokab under under tight surveillance. Mousavi’s other daughter, Zahra, was barred from attending the visitation which lasted about two hours.

The two men were reformist candidates in the widely contested June 2009 presidential elections which were followed by massive protests across the country.

Mousavi, Karroubi and Mousavi’s wife Zahra Rahnavard were placed under house arrest in February 2011 after the opposition duo called for demonstrations in support of the revolutions in the Arab World.