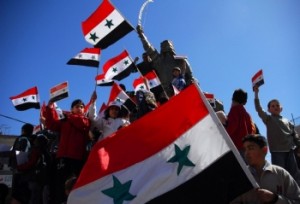 Iran news headlines on Friday include Iran denial of increasing military support to Syria’s Assad; Iranian jet fighter chase of an American drone over the Persian Gulf; US president remarks over Iran being a year away from nuclear weapon; Ayatollah Jannati statements on Iran nuclear rights and criticizing Ahmadinejad over hugging Chavez’s mother.

Iran denies reports it stepped up military support to Assad

“We believe Syria does not need any military help from Iran,” Alireza Miryousefi of the Iranian mission to the UN told Al Jazeera.

An Iranian jet fighter pursued an American surveillance drone over the Persian Gulf this week but ended the chase after a radio warning from an American escort plane, Pentagon officials said Thursday.

The chase, which occurred Tuesday, followed a more serious encounter in November, when Iranian warplanes fired on, but missed, a Predator drone carrying out a similar classified surveillance mission.

Obama says Iran more than a year away from nuclear weapon

President Barack Obama told Israelis Iran is still more than year away from developing a nuclear weapon and sought to reassure them that military force remains a U.S. option if sanctions and diplomacy fail to thwart its nuclear ambitions.

In an interview with Israeli television broadcast on Thursday, just six days before his visit to the country, Obama appeared to send a message to Prime Minister Benjamin Netanyahu of the need for patience with Washington’s Iran strategy while also showing U.S. resolve to confront Tehran if necessary.

A top Iranian cleric says Western countries must be “insane” because they do not recognize Iran’s rights to pursue nuclear energy.

Ayatollah Ahmad Jannati, who is head of the hard-line Guardian Council constitutional watchdog group, also said in an address for Friday prayers carried on state radio that Iranians must be patient to endure the Western sanctions imposed on the Islamic Republic over its nuclear program.

A senior Iranian cleric accused President Mahmoud Ahmadinejad of “heresy” on Friday by saying in his tribute to late Venezuelan leader Hugo Chavez that he would be resurrected with Jesus Christ.

“Those comments on Chavez’s return with Christ were heresy,” Ayatollah Ahmad Janati, the hardline chief of the influential Guardians Council, told worshippers at Friday prayers in Tehran.