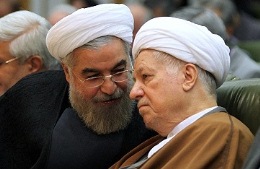 Iran’s Moderation and Development Party announced Rouhani as its candidate for the presidential election slated for June, said the report.

Political parties in the Islamic republic do not have a major role in designating the country’s political strategies. As for the presidential elections, for instance, candidates run for president individually, or influential political figures introduce their candidate for the elections.

Out of dozens of the individuals registered for the campaign, a few are qualified by the Gurdian Council, the supreme legislative body of the country, to fight for the people’s vote.

However, Rouhani said recently that “parties can play a valuable role in the society.”

“Making important decisions will encounter serious problems if parties are not empowered and do not find their (rightful) place,” he was quoted as saying by Press TV.

The Moderation and Development Party did not detail on Rouhani’ s programs regarding major challenges of the Islamic establishment, including domestic economy, international policy and nuclear issue.

The presidential hopefuls will register from May 7 to May 11.