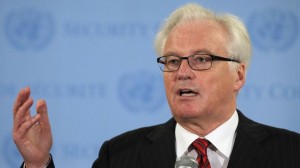 Russian Ambassador to the UN Vitaly Churkin has criticized US-engineered sanctions imposed against Iran over its nuclear energy program, describing them as “counterproductive.”

Speaking at a UN Security Council meeting in New York on Wednesday, Churkin said diplomacy is the only solution to Iran’s nuclear issue.

He stressed that the sanctions imposed on Iran are “extraterritorial” and in violation of international law.

The US, Israel, and some of their allies have repeatedly accused Iran of pursuing non-civilian objectives in its nuclear energy program. Using the unfounded allegation as a pretext, the US and its European allies have imposed several rounds of unilateral sanctions against Iran.

Iran rejects the allegations, arguing that as a committed signatory to the Non-Proliferation Treaty and a member of the International Atomic Energy Agency (IAEA) it is entitled to develop nuclear technology for peaceful purposes.

In addition, the IAEA has conducted numerous inspections of Iran’s nuclear facilities and has never found any evidence showing that the Iranian nuclear program has been diverted toward military objectives.