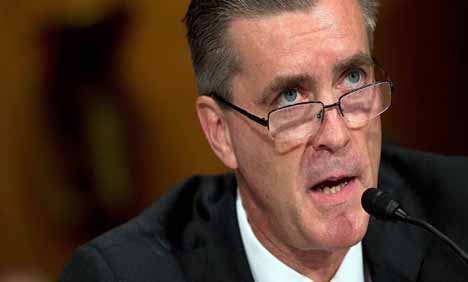 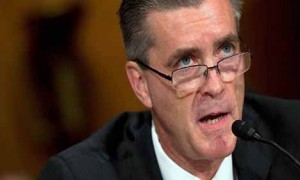 ISLAMABAD – US Ambassador to Pakistan Richard Olson on Tuesday said that America wants to help Pakistan to overcome its energy crisis, however, the US that pursuing of Pakistan-Iran gas pipeline project by Pakistan is a breach of trust between Pakistan and the United States.

Pakistan and Iran have recently signed an agreement in Islamabad to complete the project while President Asif Ali Zardari also paid a visit to the neighboring country last week to discuss the pipeline and to extend relationships with the Iranian leadership.

Olson said “we have a clear policy over Pakistan-Iran gas pipeline,” while addressing a gathering during his visit to Tarbela Dam on Tuesday.

He said that the US is in favor of Turkmenistan-Afghanistan-Pakistan-India (TAPI) gas pipeline project, adding that US would also help Pakistan reduce its energy crisis if understandings with Iran are called off.

American’s State Department spokesman Patrick Ventrell commenting on the project on said that “it is in Pakistan’s best interest to avoid any sanction inducing activity.

Pakistan is facing a severe energy crisis which has damaged its industrial setup specially the textile sector. “We will help Pakistan to complete Gomal Zam and Sadpara dams,” Olson concluded.

Meanwhile on Monday, Highlighting Pakistan’s growing energy needs and defending its right to explore low-cost solutions on immediate basis, President Asif Ali Zardari told the world that the gas pipeline agreement with Iran is not against any other country.

While inaugurating three different energy projects from the Governor’s House on Monday, Zardari said the energy projects, as well as the gas pipeline with Iran, should be seen as measures to overcome the power shortfall prevailing in the country.

Presidential Spokesman Senator Farhatullah Babar said that Zardari, while highlighting the country’s growing energy needs for accelerating national growth, said that Pakistan needed to exploit all available resources particularly the low-cost hydropower projects, in addition to exploring the ways and means to import power and energy from its neighbouring countries. The president said that Iran-Pakistan gas pipeline project was one such endeavour, which would be formally launched on March 11.

The president said that Pakistan was a sovereign country and had every right to pursue projects in national interest, adding that it did not intend to offend anyone. He said that Pakistan was an active player in contributing to world peace and stability. He said that the Iran-Pakistan gas pipeline should be viewed purely in the context of meeting national energy needs. He hoped that the critics of the project would consider Pakistan’s energy needs.

He said the government had drawn up plans to not only meet the current electricity needs, but to cater for future needs as well, and was working on over two dozen hydropower projects across the country in this regard.

These include mega projects like Bhasha Dam, Neelum-Jhelum, Dasu and Tarbela 4th Extension Project, he said, adding that Gomal Zam Dam, Satpara Dam, Dubair Khwar and Jabban hydropower projects were nearing completion. Zardari said that after completion, these projects would provide 21,000 megawatts of additional electricity, and would store 13 million acre feet of water. “This will bring down the cost of manufacturing and make Pakistani products more competitive in the global market,” he said.

Inaugurating the dry port, Zardari said that it was a bold initiative of Pakistan Railways to enter vigorously into public-private partnership. The setting up of dry ports and provision of dedicated rolling stock to the private sector to operate freight trains is a bold initiative, he said.

He complimented the Railways for starting public-private partnership in vital areas including operating passenger trains and providing track access to the private sector for freight operations. He said that the addition of a dry port equipped with state-of-the-art facilities at Prem Nagar would almost double the existing capacity from four to seven million tonnes per annum. He advised the Railways management to plough the profit back into the project to further improve and expand its existing operations to meet growing demands for new tracks and extending platforms and loading areas.

He said that the private sector, by its efficient and cost-effective operations, innovative techniques and best management practices, was fully capable of producing quality goods and services, which are also cost effective. He said that the private sector was considered an engine of growth the world over, whereas the public sector plays the role of facilitator and regulator.

He said that in Pakistan too, efforts were being made to delegate the public sector the role of facilitator and regulator, which should venture only in areas dominated by concerns for public service instead of making big profits.

The president commended DP World, Premier Mercantile Services, and Pakistan Railways for entering into partnership. He said that the Prem Nagar dry port should be developed as a model hub for more such ports for inland container traffic throughout the country to reduce congestion within and near cities.

He also congratulated Minister for Railways Haji Ghulam Bilour and Minister for Water and Power Chaudhry Ahmad Mukhtar and their teams, and praised the work and dedication of Chinese and Austrian project consultants and contractors, who he said rendered valuable assistance in the completion of these projects and hoped that the remaining projects would also be completed expeditiously.