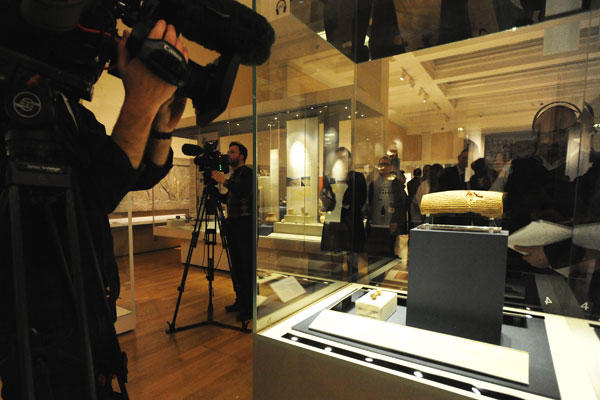 The Cyrus Cylinder, symbol of Persian tolerance, heads to US 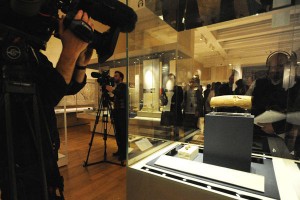 The 2,600 year old Cyrus Cylinder, a promise of tolerance from the ancient Persian King, is heading to the US for the first time.

Can an ancient hunk of clay bearing a message of tolerance from the Persian Empire help Americans and Iranians chip away at a generation of mutual hostility?

The Cyrus Cylinder arrives in the United States for the first time this week, a 2,600-year-old symbol of enlightened rule that heralded the freedom of the Jews after the capture of Babylon by the Persian King Cyrus the Great.

The size of a football with tapered ends and some shards lost to the centuries, the Cyrus Cylinder today represents a potent blend of Persian pride and tolerance and respect for others and their beliefs, and is regarded as one of the most iconic objects of the ancient world.

Inscribed upon the baked-clay cylinder in spiky cuneiform script is a proclamation made by Cyrus when he conquered Babylon in 539 BC. Noting that he was “king of the universe” – the Persian Empire then was the largest the world had ever seen – Cyrus describes how, with the help of the “great lord,” he peaceably captured Babylon and set free captured minorities, including the Jews.

“I permitted all to dwell in peace,” reads the last line on the cylinder.

The significance of the object, and the promise it holds of introducing Americans to an aspect of Iranian heritage far from the usual drumbeat of nuclear talks and angry rhetoric, was made clear at a recent send-off ceremony at the British Museum in London, where the cylinder now lives. It was discovered in present-day Iraq by a British expedition in 1879.

“What the Cyrus Cylinder does is remind us of the greater union we all have with one another. We are not islands, no man is an island, no culture is an island,” said Karen Armstrong, a well-known religious scholar, at the British Museum send-off of the cylinder to the US.

“The ideas of the Persian tradition permeate the Western tradition, and it’s there at a profound level. The idea that we are separate, individual…that these ideologies cannot coexist, is an illusion,” said Ms. Armstrong. “And sometimes it’s easier to focus on a particular object like that, to look at its history, to see its effects…the way cultures have always interacted and melded with one another creatively.”

Cyrus provided the example of a world leader “compassionate and respectful for other peoples, and this is the challenge I think that the Cylinder gives us today, and also its great hope,” said Armstrong.

The US tour starts this week at the Smithsonian Institution in Washington, DC., and will travel to Houston, New York, San Francisco and Los Angeles, cities where concentrations are highest of Iranian-Americans living in the US. The tour is sponsored by the London-based Iran Heritage Foundation.

When the cylinder was loaned by the British Museum to Iran in 2010-2011 up to one million Iranians came to see it, though the visit was not without controversy. At the unveiling ceremony,President Mahmoud Ahmadinejad spoke of how the cylinder emphasized freedom of thought and “respect for human beings’ greatness and basic rights.”

The comments caused a stir among regime critics, coming less than a year after Iranian security forces crushed an uprising sparked by charges of massive fraud in Iran’s 2009 presidential election.

At the ceremony, Ahmadinejad also placed around the neck of an actor representing Cyrus a black-and-white checked chafiyeh scarf – which in the Islamic Republic is a symbol of the popular resistance of the Iran-Iraq war of the 1980s, and devotion to resistance for Palestine and Lebanon.

The opposition Jaras website said the politicking meant the cylinder was “a stranger in its own home,” and that Cyrus would be shocked at the president’s comments about freely choosing leaders, Radio Free Europe/Radio Liberty reported at the time.

The hardline Kayhan newspaper even called for the Cylinder not to be returned, asking if it did not, in fact, belong to Iran instead of the British. If that were the case, Kayhan wrote, “then why should we return this stolen and historical and valuable work to the thieves?”

Tensions between the US and Iran are high, with negotiations underway over Iran’s controversial nuclear program. Since the 1979 Islamic revolution, Iran’s most ardent regime loyalists chant “Death to America!” and “Death to Israel!” every week at Friday prayers. Yet Iran also boasts one of the most pro-American populations in the Middle East, and the largest Jewish population in the region outside of Israel.

American officials also routinely declare that “all options are on the table” – including military strikes – in dealing with Iran’s nuclear program, and the US has engineered a juggernaut of crippling economic sanctions against the Islamic Republic. Yet when President Barack Obama first was elected to office, he sought to reach out to Tehran, and quoted one of ancient Persia’s most renowned poets, Saadi, saying: “The children of Adam are limbs to each other, having been created of one essence.”

That sentiment – though overshadowed currently by US and Israeli covert actions against Iran, and Iran’s apparent attacks and plots in response, along with withering rhetoric – is in keeping with the message of the Cyrus Cylinder.

The cylinder “is one of the great expressions of a long human aspiration,” says British Museum Director Neil MacGregor, in an article. He notes that the example of Cyrus was a “guiding light” to the American Founding Fathers, with Thomas Jefferson said to have owned two copies of Xenophon’s book Cyropaedia, a biography of Cyrus.

“That is what this Cylinder records: how the ruler, guided by God, had toppled the despot and was going to bring freedom to the people,” notes Mr. MacGregor. “Cyrus invented a model of how to run a multilingual, multifaith, multicultural society. Of course this empire was held together by military force, but it was governed on principles so tolerant of diversity that it provided 200 years of stability until it was shattered by the aggression of Alexander… Alexander’s successors could not sustain his conquests and the empire fragmented… but what Cyrus had created lived on – a dream of the Middle East as a coherent unit, in which people of different faiths could live together. It was an ideal even his enemies admired.”

Those bringing the Cyrus Cylinder to America for the first time hope some of that cultural diplomacy breaks down contemporary barriers, where political diplomacy has not.

“This must be one of the chief tasks of our time: to build the global community where people of all persuasions, all ethnicities, can look with respect at one another’s most sacred traditions and learn to co-exist,” said Armstrong, at the cylinder send-off.