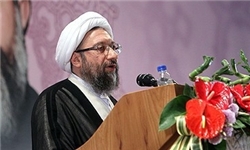 Iran’s Judiciary Chief Ayatollah Sadeq Amoli Larijani lambasted the West’s double-standard policies on human rights, and said that the West is making an instrumental use of the issue and is, thus, not qualified to judge the human rights conditions of other world countries.

“Westerners, who repeatedly emphasize on civil liberties, deprive other countries of the right to vote (in international bodies) and then accuse those states of human rights violation,” Ayatollah Amoli Larijani said on Thursday.

“While we (Iran) can spell out a large number of human rights concepts in a religious context, the West is incapable of undertaking such a task despite its liberal ideologies,” he added.

In January, the government of Spain asked the country’s major satellite provider Hispasat to take an Iranian satellite channel off the air in a blatant violation of freedom of speech.

The move comes a month after the Spanish satellite company – Hispasat – terminated the terrestrial broadcast of Hispan TV.

Iran has always lashed out at the western countries for using human rights issues as a tool and pretext for pressurizing independent states to conceal their own crimes and wrong deeds.