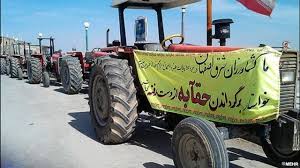 TEHRAN, Iran (AP) — Hundreds of farmers in central Iran have clashed with police during a protest this week against the government’s decision to divert water from the area to another province.

Iranian media say farmers in the town of Varzaneh in Isfahan province smashed a pipeline carrying water from Zayandeh Rood River to neighboring Yazd province. The Isfahan farmers say they need the water themselves because of a prolonged drought.

The semiofficial Mehr news agency said Saturday that the farmers agreed to hold talks with government officials to resolve the long-running dispute.

The clashes with the police erupted during a protest by the farmers on Wednesday. Several people were injured.

Protests over farming issues are rare in Iran though Isfahan province has recently been the scene of small, sporadic rallies over water rights.