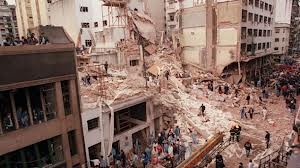 The Foreign Ministry expressed its disappointment with the Argentinean Congress’ decision to launch a joint investigation with Iran into the 1994 bombing in Buenos Aires, which killed 85 people in the city’s Jewish community center.

“Past experience shows that agreements with Iran don’t change Tehran’s positions and are not followed. The same holds for the current agreement, which will not lead to bringing those responsible for the bombing to trial. We are disappointed with the decision,” the Foreign Ministry stated.