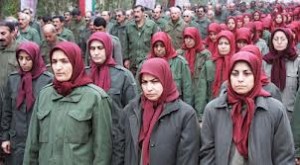 An Iranian opposition group urged the U.N. refugee agency Wednesday to provide better protection for its members in Iraq following a mortar attack on their camp near Baghdad airport in which seven people were killed.

The call came during a meeting in Geneva of the National Council of Resistance of Iran, a France-based Iranian opposition group. The group’s leader, Maryam Rajavi, urged the U.N. to transfer about 3,100 members of its militant wing, known as the Mujahedeen-e-Khalq, or MEK, from the Baghdad facility to Camp Ashraf near Iraq’s border with Iran.

Last year, the MEK abandoned Camp Ashraf, where it had been based since 1986, and moved to the former U.S. base Camp Liberty as a temporary way station while the U.N. finds host countries for the refugees. The Iraqi government considers the MEK a terrorist organization and has been pressing its members to leave ever since their patron, Saddam Hussein, was ousted in the 2003 U.S.-led invasion.

On Feb. 9, seven people were killed and dozens wounded in the mortar attack, which was claimed by Shiite militants.

Speaking by telephone from Geneva, Patrick Kennedy, a former congressman from Rhode Island, said he met Wednesday with the U.N. High Commissioner for Refugees, Antonio Guterres, to discuss efforts to resettle the MEK members.

Kennedy said the U.S. and the U.N. had made a commitment to the exiles when they left Camp Ashraf to consider them protected people and their resettlement “needs to be given a sense of urgency that’s not in place.”