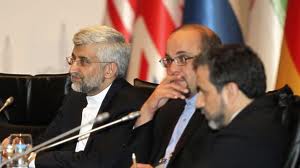 “We hope that the parties concerned will work together to push for positive progress with a flexible and pragmatic attitude while accommodating each other’s concerns,” said Ma Zhaoxu, an assistant foreign minister who heads the Chinese delegation.

Tuesday’s talks between Iran and the so-called P5+1 powers — Britain, China, France, Russia, the United States and Germany — are the first this year.

“Dialogue and negotiation will be the only correct solution to the Iranian nuclear issue, which is always our stand,” Ma told journalists prior to the talks.

Ma noted that China has made great efforts in the talks and believes the parties concerned would finally find some common ground despite differences.

Iran is locked in a bitter dispute with the West over its nuclear activities, with the latter accusing Tehran of developing nuclear weapons under a civilian cover, a charge Iran has consistently denied.