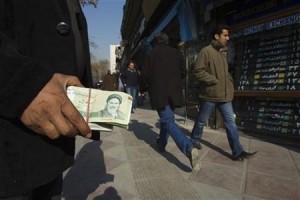 TEHRAN — Saeed, the manager of a corner store in central Tehran, oversees a shop crammed with packaged food, toiletries and paper products. But he said his middle-class customers increasingly pass on imported items such as British-made Ahmad tea, advertised as “the most exclusive tea in the world,” whose price in Iran has nearly tripled in two months.

“This tea is now just too expensive for most people,” said Saeed. “I can’t even afford it myself anymore, so how can we expect customers to buy it?” Like others interviewed, he did not want his last name published for fear of government reprisals.

Even amid escalating U.S. sanctions over Iran’s nuclear program — the latest round of penalties took effect earlier this month — store shelves are stocked, cafes are packed, and the government appears relatively stable. But as inflation tied to sanctions drives down the value of the Iranian rial, some of the loudest complaints are coming from members of the robust middle class, who can no longer afford the imported goods and foreign travel that they grew used to when petrodollars streamed into Iran.

As the economy reels, Iran’s leaders, who take pride in having ended the deep poverty that reigned in the country for much of the 20th century, have prioritized alleviating the woes of the poor masses through subsidies of staples and direct cash payments. But they have done little for the middle class, which expanded dramatically after Iran’s 1980s war with Iraq and the oil boom years of the last decade.

Now, the question of whether to try to maintain that prosperity or continue to focus on the needs of the poor has become the subject of a key political debate.

In the meantime, the service workers, small business owners and civil servants who make up the middle class — about 50 percent of the population, according to some estimates, though data are unreliable — complain that they have had to alter the spending habits that a currency buoyed by record oil revenues allowed.

The blow, so far, is mostly psychological. For many, out are the foreign cellphones, tablets, cosmetics and international vacations, whose values are pegged to the dollar. Domestic products widely perceived as inferior are in.

“So many things I used to get for my family and for the people whose houses I clean, I’ve just stopped buying,” said Mahnaz, a domestic worker who listed Pantene shampoo and foreign-made instant coffee and nail polish as items she has recently eliminated from her shopping cart.

Sanctions on Iran’s oil sector have cut revenues in half in the past year and propelled the fall of the rial, though some analysts speculate that Iran’s central bank has also engineered the dive to strengthen its foreign currency reserves. In January 2012, the informal, street market rial-to-dollar rate was 16,000 to 1; today it is 37,000 to 1. The latest round of sanctions is making it even more difficult for Iran to access international oil revenue.

“Never before have we seen our money lose so much of its value so quickly, and it has affected our economy deeply,” said lawmaker Ezatollah Yousefian Molla, a member of the parliament’s planning and budget commission.