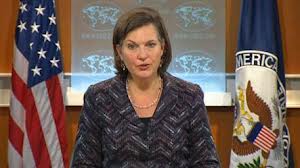 WASHINGTON, Feb. 21 (Xinhua) — The Obama administration on Thursday denounced as “yet another provocative step” Iran’s latest installation of new centrifuges at its main uranium enrichment plant, calling on the Islamic republic to engage in “serious and substantive” talks with the world powers over its disputed nuclear program.

State Department spokeswoman Victoria Nuland called Iran’s move “a further escalationolation of Iran’s obligations” under the resolutions of the UN Security Council and the International Atomic Energy Agency (IAEA) Board.

“So it would mark yet another provocative step,” she said at a regular news briefing.

An IAEA report released earlier in the day said Iran has started the installation of IR-2m centrifuges, a new model of its centrifuges which could significantly boost its uranium enrichment capacity, at its Natanz plant.

Iran, however, stressed that the advanced centrifuges would be applied to produce five-percent enriched uranium.

“We’re obviously concerned that Iran continues to flout its international obligations and has refused to halt its enrichment activities and in fact is taking steps to expand its capacity,” Nuland said.

“It already has enough uranium to fuel the Tehran research reactor for at least a decade, and its recent actions would allow it to increase its stockpiles, you know, well beyond the civilian need,” she added.

Iran insists that its nuclear program is for power generation and medical use only, but the West regards it as a cover for making nuclear weapons.

The latest installation came as Iran has agreed to resume talks with Britain, China, France, Russia, the United States and Germany, the so-called P5+1, over its nuclear project next Tuesday in Almaty, Kazakhstan.

Both Nuland and her White House counterpart Jay take the opportunity to engage with the world powers in a “serious and substantive” manner, saying a diplomatic solution is still possible.

“They have an opportunity to come to those talks ready to be serious, ready to allay the international community’s concerns, and we hope that they take that opportunity,” Nuland said.

“We hope that the Iranian regime will make the strategic decision to come to the Feb. 26 talks … prepared to discuss substance so there can be progress in addressing the international community’s concerns about the nature of the Iranian nuclear program,” Carney told reporters at the White House.

“The burden of sanctions could be eased, but the onus is on Iran to turn its stated readiness to negotiate into tangible action,” Carney said, adding “What we have said and remains true today is that the window remains open for this to be resolve dramatically, but that window will not remain open indefinitely.”

Three rounds of talks were held last year between Iran and the P5+1 but no breakthrough was made. Washington has set a March deadline for Iran to begin “substantive cooperation” with the IAEA or face the UN Security Council.