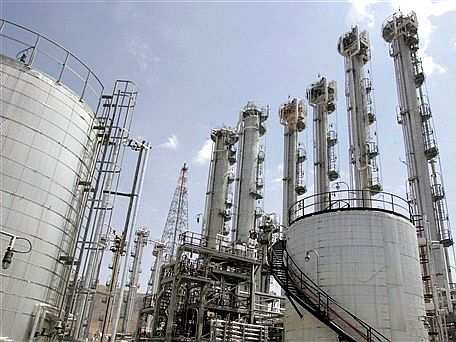 Iran appears to advance in construction of Arak nuclear plant 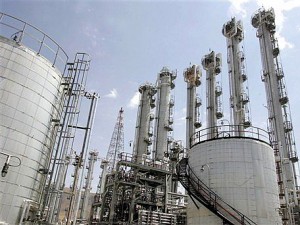 (Reuters) – Iran appears to be advancing in its construction of a research reactor Western experts say could offer the Islamic state a second way of producing material for a nuclear bomb, if it decided to embark on such a course, a U.N. report showed.

Iran has almost completed installation of cooling and moderator circuit piping in the heavy water plant near the town of Arak, the International Atomic Energy Agency (IAEA) said in a confidential report issued to member states late on Thursday.

Nuclear analysts say this type of reactor could yield plutonium for nuclear arms if the spent fuel is reprocessed, something Iran has said it has no intention of doing. Iran has said it “does not have reprocessing activities”, the IAEA said.

In its previous report on Iran, in November, the Vienna-based U.N. agency said installation work at Arak was continuing, without giving any indication of how far advanced it was.

Iran rejects Western allegations it seeks to develop a capability to assemble nuclear weapons, saying its atomic program is entirely peaceful and that the Arak reactor will produce isotopes for medical and agricultural use.

Iran says it plans to begin operating the facility in the first quarter of 2014, the IAEA said. Tehran last year postponed the planned start-up from the third quarter of 2013, a target that Western experts said always had seemed unrealistic.

The Arms Control Association, a Washington-based research and advocacy group, said late last year that it was questionable whether Iran would be able to meet the new target date as well, in view of “significant delays and impeded access to necessary materials” because of international sanctions imposed on Iran.

Western worries about Iran are focused largely on uranium enrichment plants at Natanz and Fordow, as such material refined to a high level can provide the fissile core of an atomic bomb. But experts say Arak may also be a proliferation issue.

The Arak facility is a “growing source of concern”, said Mark Fitzpatrick, director of the non-proliferation and disarmament program of the International Institute for Strategic Studies (IISS), a London-based think-tank.

Israel, believed to be the Middle East’s only nuclear-armed state, sees Iran’s nuclear program as a serious danger and has threatened to attack its atomic sites if diplomacy and sanctions fail to resolve the decade-old dispute.

If it does, the nuclear sites at Natanz, Fordow and Arak in central Iran are likely to be targets. Fitzpatrick said it could be Arak that triggers a conflict because attacking it after it is launched could cause an environmental disaster.

The report, issued just a few days before six world powers and Iran are due to resume negotiations after an eight-month hiatus, underlined the tough task facing the West in seeking to pressure Tehran to curb its nuclear activities.

Cliff Kupchan, Middle East director at the Eurasia consultancy, said Iran had adopted a defiant policy of pressing ahead with its nuclear program, despite harsh sanctions.

“As a result, Israel and the U.S. Congress will press a receptive U.S. administration to move forward with new and even harsher sanctions,” he said in a research note.

The Institute for Science and International Security (ISIS), a U.S. think-tank, noted that Iran planned to use a medical research reactor in Tehran, known as TRR, to test fuel for Arak.

“The TRR is now more than a medical isotope production reactor, Iran’s stated use for the reactor, and is necessary for the operation” of Arak, it said in a report.

If operated optimally, the heavy-water plant could produce about nine kilograms (20 pounds) of plutonium a year, or enough for about two nuclear bombs annually, ISIS has said previously.

“Before it could use any of the plutonium in a nuclear weapon, however, it would first have to separate the plutonium from the irradiated fuel,” it added on its website.

Iran has repeatedly declared it has no plans to reprocess the spent fuel. But, “similarly sized reactors ostensibly built for research” have been used by India, Israel, North Korea and Pakistanto make plutonium for weapons, Fitzpatrick said.