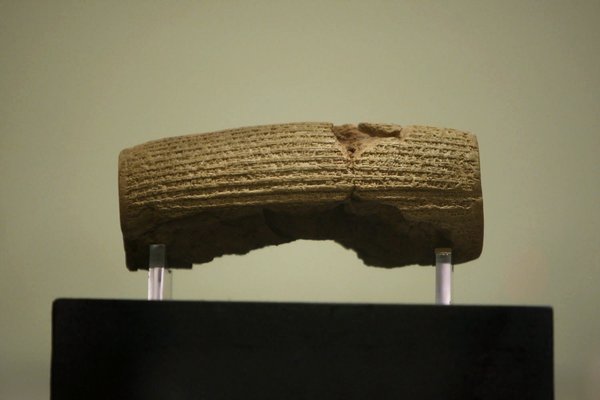 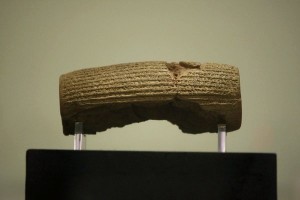 LONDON — I wanted to test a theory about Iran, so the other evening I made my way to the British Museum, strolled past glass cases full of the sarcophagi and mummies of ancient Egypt, and found myself in a room whose centerpiece is a baked clay cylinder smaller than an American football.

The object, somewhat the worse for wear after two-and-a-half millennia, was dug up in what once was Babylon, now Iraq, in 1879 during a British Museum excavation. Made soon after Cyrus of Persia captured Babylon in 539 B.C., it is covered in the spiky characters of Babylonian cuneiform. Neil MacGregor, the director of the museum, has called it “the first real press release.” More dubiously, and more frequently, it has been called “the first bill of human rights.”

This, of course, is the much debated Cyrus Cylinder, which says that, aided by the chief Babylonian god Marduk, Cyrus (“King of the universe, the great king”) captured Babylon without a fight, repatriated deported people living in Babylonian exile, and, as the museum put it in 2010, “restored shrines dedicated to different gods.”

It has been widely interpreted as the decree of an enlightened ruler determined to allow diverse peoples to rebuild their altars and worship their gods in their own way in their own place with their own sacred images. Cyrus, in this reading, is a father of the multifaith society.

Among the peoples allowed by Cyrus to return — at least in a widely accepted reading recounted in the Bible — were the Jews, who went back to Jerusalem to rebuild the Temple. So did their exile end. Weeping beside the waters of Babylon ceased. Cyrus the Persian became a revered figure in the Hebrew Bible, a monarch from what is now Iran who ended the banishment of the Jews.

A small crowd had gathered around the Cylinder. They were there to wish it well. This week it departs for a nine-month stay in the United States, where it has not previously been seen, although presidents, including Thomas Jefferson (who owned two copies of the Cyropaedia, Xenophon’s description of a ruler’s ideal education), have been admirers of Cyrus.

The Cylinder will be displayed on the East Coast at the Smithsonian in Washington and the Metropolitan Museum in New York; and on the West Coast at the Asian Art Museum in San Francisco and the Getty Villa in Los Angeles. It will also make an appearance in Texas at Houston’s Museum of Fine Arts.

This New World odyssey of the Cyrus Cylinder is timely. It occurs with the United States and Iran still locked in the negative stereotypes the movie “Argo” has done nothing to assuage. As John Limbert, a former U.S. hostage in Iran, has observed, the Islamic Republic sees America as “belligerent, sanctimonious, godless and immoral.” America, in turn, sees Iran as “devious, mendacious, fanatical.” Or at least on the surface they do. Somewhere beneath that lurks mutual fascination.

The Cylinder will not resolve this antagonism. But, compact and mute, it carries a message of tolerance. It is a powerful antidote to belligerent certitudes and shrieking “truths” — an object packed with ambiguity and now freighted with a 2,500-year-old tale of human vanity and frailty.

What is it? A Babylonian artifact written by a Babylonian scribe about a Persian conqueror; prized by Iranians as an emblem of their civilization; valued by many Jews whose Bible gives credit for Cyrus’s acts not to a Babylonian God but to Jehovah; found in modern Iraq by British-sponsored archaeologists who acquired it from the Ottomans; exploited by the shah to underwrite his megalomania; a pre-Islamic text adopted by the Islamic Republic during the Iran-Iraq War as a symbol of past victories; a declaration compared to the U.S. Constitution because of what it says about peoples worshiping freely in a single state; and now an object that within the space of a few years has traveled to Tehran (where more than one million Iranians saw it) and to Washington.

All of this is contained in a cylinder that is about nine inches long and four inches wide. If nothing else, it speaks volumes about connections.

With its talk of a king of the universe and its benign message, the Cylinder is also a reminder of contradictions, of the riddles within riddles that make up Iran, a country where people open a book of Hafez’s poetry at random to decide on a course of action. Like many much-conquered nations, Iran loves artifice. Ambiguity is infinitely preferable to clarity because it more accurately reflects life. Direct speech is abhorred.

National conventions include the ceremonial form of intention-veiling flattery known as “taarof,” and the sacrifice of truth to higher religious imperative known as “tagieh” (The Shiites, like the Jews, have been lonely in the Middle East; lying was often a means to survive.) The third “T” of the Iranian psyche is “tazieh,” effectively a synonym for dramatic lament and epic resistance.

My theory, by the way, was this: It may just be possible to write a column about Iran without using the “N” word.