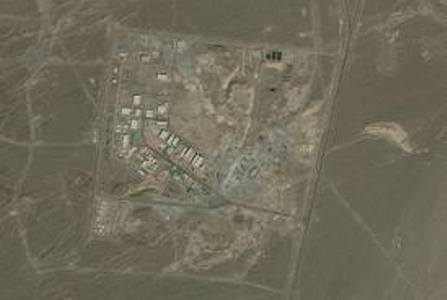 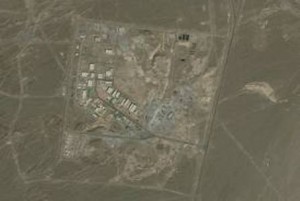 VIENNA (AP) — In a disheartening signal to world powers at upcoming Iran talks, Tehran has started installing high-tech machines at its main uranium enrichment site that are capable of accelerating production of reactor fuel and – with further upgrading – the core of nuclear warheads, diplomats said Wednesday.

Iran already announced last week that it had begun mounting the new enriching centrifuges, but one diplomat said at the time that the announcement was premature with only a “small number” on site and not yet installed.

Diplomats told The Associated Press on Wednesday, however, that installation was now well on its way, with inspectors from the International Atomic Energy Agency seeing close to 100 or more machines mounted when they toured the site a few days ago. Depending on experts’ estimates, the new-generation centrifuges can enrich uranium three to five times faster than Iran’s present working model.

The Islamic Republic insists it is not working on a nuclear weapons program, but rather is enriching uranium only to make reactor fuel and for scientific and medical purposes – as allowed by international law.

But many nations are suspicious because Iran went underground after failing to get international help for its uranium enrichment program in the 1980s, working secretly until its activities were revealed a decade ago. More recent proposals for international shipments of reactor fuel in exchange for Iranian enrichment concessions have foundered, with each side blaming the other.

Shrugging off demands to mothball enrichment – and growing international sanctions – Iran has instead vastly expanded the program to where experts say it already has enough enriched uranium for several weapons if the material is further enriched.

The start of the centrifuge upgrade at Natanz, Iran’s main enrichment site southeast of Tehran, flies in the face of world-power efforts to induce Iran to scale back on enrichment. As such, it is likely to hurt chances of progress at Feb. 26 talks in Kazakhstan between the two sides – adding to a string of negotiating failures.

When Iran announced its intentions last month, Western diplomats downplayed the proclamation’s significance, noting Tehran did not say when it would start populating Natanz with the new machines. But any start of an upgrade is sure to increase international concerns, particularly if verified as expected in an IAEA report later this week.

The three diplomats speaking to the AP on Wednesday all are involved in the Vienna-based IAEA’s attempts to monitor Iran’s nuclear program. They demanded anonymity because they were not allowed to discuss confidential information.

Russia and China often are at odds with the West on how harshly Iran’s nuclear activities should be censured, and Russian Foreign Minister Sergei Lavrov said recently that Iran was within its legal rights to install new generation centrifuges. At the same time, he called for a suspension of uranium enrichment during negotiations to improve the political atmosphere.

While moving to increase the potency of its enrichment program with the new centrifuges, however, Tehran also has recently resumed converting some of its higher-level enriched uranium at its Fordo enrichment site into reactor fuel plates after suspending the activity last year. That is likely to provide some reassurance to nations concerned about Iran’s nuclear aims because the plates are difficult to reconvert back into weapons usable material.

About 700 of the old machines at Fordo are churning out higher-enriched material that is still below – but just a technical step away – from weapons-grade uranium. Iran says it needs that higher-enriched level to fuel a research reactor

With higher-enriched uranium their immediate concern, the six powers over the past months have inched toward meeting Iranian demands of sanctions relief but say Tehran must first suspend its output at Fordo. Iran, in turn, wants sanctions eased before it commits to even a discussion of an enrichment cutback.

The diplomats said Iran was also upgrading its enrichment capabilities at Fordo but declined to provide further details ahead of the release of the IAEA report.

In first revealing plans to update last month, Iran indicated that It could add more than 3,000 of the new-generation centrifuges to the more than 10,000 older models it has at Natanz turning out enriched uranium at grades lower than at Fordo. The lower the grade, the harder it would be to turn into weapons-grade material.

Olli Heinonen, the former IAEA deputy director general in charge of Iran, told the AP last week that Iran could install 3,000 or more of the high-tech centrifuges at Natanz within six to nine months, assuming that Tehran had the material to make the machines.

Iran, in its dealings both with the six powers and the IAEA, has continually acted as if it were in the position of strength. On Saturday, Ayatollah Ali Khamenei, Iran’s Supreme Leader, asserted that his country was not seeking nuclear weapons, but that if Tehran intended to build them, “the U.S. could in no way stop the Iranian nation.”

David Albright, whose Institute for Science and International Security is a source for the U.S. government on proliferation issues, said Iran’s hopes that the new centrifuges could strengthen its hand at the Kazakhstan talks could backfire.

“Given the low expectations for negotiations during the next several months, Iran risks giving the impression to the West that it is racing to the bomb rather than strengthening its negotiating position,” he said Wednesday.

But analyst Yousaf Butt, professor and scientist-in-residence at the Monterey Institute of International Studies, said that – with Iran legally entitled to enrich -the six powers first “should consider rolling back some sanctions” if they want Iran to respond.