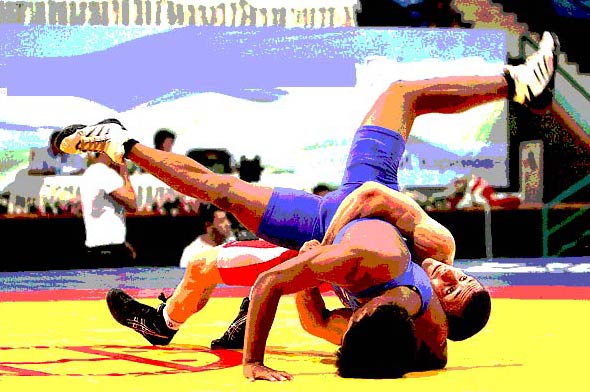 Iran, where wrestling is king, mourns loss of sport in Olympics 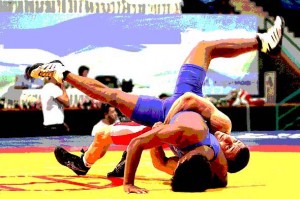 TEHRAN — Not much has changed in the Marqoobkar wrestling club in South Tehran for decades. On a recent afternoon, boys in their wrestling singlets ran circles on a yellow mat, as they do every day, the tallest leading, followed by two dozen others and a tiny 9-year-old trailing behind. The canvas squeaked under their bare feet.

The passage of time was marked only by a series of pictures of their coach, Esrafil Dodangeh, 67, lining the back wall — black and whites, from when he was a younger man hugged by barrel-chested wrestlers, to yellow newspaper clippings with the many champions he “made” over the years.

Wrestling, Mr. Dodangeh said, is about becoming a “pahlavan,” a respectable, forgiving man, caring for the downtrodden and standing up for justice. “A good wrestler is a good, religious person,” he said.

As wrestlers from countries with a great tradition in the sport, like Russia, Turkey and even the United States, gather in Tehran this week for the annual Wrestling World Cup competition, they are indignant over the recent decision by the International Olympic Committee to drop the sport from the Games as of 2020.

But probably no country is taking the decision as hard as Iran, where wrestling is deeply embedded in the national cultural narrative, going back thousands of years. In the 2012 London Olympics, Iranian wrestlers collected half of all the wrestling medals, including three gold.

Legendary Persian kings would wrestle their opponents in epic battles. The first Shiite saint, Imam Ali, was said to be a wrestler. In modern times, a wrestler named Gholamreza Takhti, who stood up to Shah Mohammed Reza Pahlavi and died under mysterious circumstances in 1968, is still very much revered here. Above all, wrestling is a manly sport in Iran, still defining traditional male culture.

Iranian officials are preparing seminars during the World Cup, which starts on Wednesday, to discuss with wrestling officials of other countries, including the United States, how to keep wrestling as an Olympic sport.

“You can imagine this decision is quite a blow for us,” said Mansour Asqari, an official member of Iran’s wrestling federation. “We have been winning wrestling medals since 1948, in Greco-Roman and freestyle categories.”

In 2002, the I.O.C. concluded that wrestling lacked “global popularity” and had “relatively low broadcast and press coverage.” But Iranians say that a flurry of changing rules and a new point system have destroyed the beauty of the sport. “We need to return to longer matches, and emphasize more beautiful techniques,” said Mr. Asqari, noting that the I.O.C. had allowed new sports like beach volleyball and BMX cycling. “Wrestling is one of the oldest sports in the world. We can’t just let the sport fade away because of ratings.” He estimated that there are about 300,000 active wrestlers in Iran.

One of them is Hamid Sourian, 27, who won a gold medal in London in the 55 kg (121 pound) Greco-Roman competition and started wrestling when he was 7. Without the lure of the Olympics, he said, he probably would not have pursued the sport. “Training is hard,” he said. “You suffer to become the best. If there are no Games, there is no motivation.”

Mr. Sourian was happy to be a champion, a “qahreman” in Persian, but following his coach he strove to be a pahlavan. “That title is granted to you by the people, not in a championship,” he said. “It’s about being high-minded, having good ethics and being generous. He who stays in touch with his roots becomes a pahlavan in the eyes of the people.”

The quasi-mysticism that lies at the foundation of Iranian male culture has roots in the Iranian tradition of the “Zurkhaneh,” the house of strength. There men dressed in loincloths follow a workout schedule hundreds of years old, to religious chants, while wielding heavy clubs and bow-like weights above their heads. Usually a session ends with a wrestling match between two pahlavans, the highest in the house’s hierarchy. Though declining interest has forced the closing of many of these clubs, their values are still held high by many.

One problem, Iranian wrestling officials admit, is that the country does not allow women to wrestle, a decision that would update the sport and possibly make it commercially more attractive.

“It is true that not allowing women to compete limits us,” Mr. Asqari admitted. “But we cannot allow it due to our Islamic beliefs.” No women will participate during the Wrestling World Cup competition, Mr. Asqari confirmed. “It is hard for us to change,” he said. “Things are good the way they are.”

At the Marqoobkar wrestling club, in the Nasiabad neighborhood, Mr. Dodangeh kept a strict eye on his boys.

“Don’t talk,” he shouted at two chubby boys (“heavyweights,” Mr. Dodangeh said) who lay entangled on the mat. “Let’s send them home for today,” he concluded. “They are getting tired.”

Mr. Dodangeh sat down behind a steel table in his office and sipped tea. On the wall hung a painting of the first Shiite imam, Ali, next to a colorful oil painting of himself. One by one, the boys came to his desk. “Goodbye, boss,” they said respectfully.

They would all go and watch the World Cup matches in Tehran’s Azadi sports complex, he said. Admission is free — the government did not want to chance having any empty seats — a pleasant surprise for the boys and their head coach, none of whom have a lot of money.

“I’m looking forward to seeing Jordan Burroughs,” Mr. Dodangeh said. After Mr. Burroughs, an American, beat Iran’s Saeed Goudarzi for the gold medal in the 163-pound class, a photograph of the two men hugging became one of the most recognizable images of the 2012 London Olympics.

“Jordan is a pahlavan,” Mr. Dodangeh concluded. “We need more pahlavans in this world. We need wrestling.”