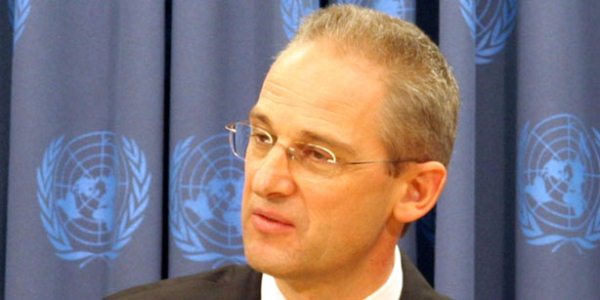 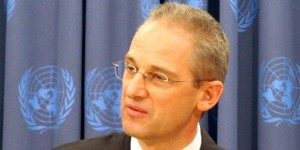 Asked at the daily press briefing about Ban’s interview to the Washington Post newspaper last week in which he reportedly said ‘Iran could use UN talks as cover to build bomb,’ Nesirky said “he did not say that.” Asked if he is denying what the newspaper reported, Nesirky said “No.” But “that was not the exact quotation from what the Secretary General has said,” assuming that the Washington Post reporter misinterpreted Ban’s comment.

What Ban told the newspaper was “we should not give much more time to the Iranians, and we should not waste time … We have seen what happened with the DPRK”.

The newspaper’s lead was “the United Nations must be decisive and swift in judging whether diplomacy can resolve world concerns about Iran’s nuclear program, UN Secretary General Ban Ki-moon said Thursday, or invite the risk that Iran, like North Korea, will use talks as a cover to build a bomb”.

“The Secretary-General believes that the way to solve this difficulty is through negotiations, through dialogue. Such talks are going to take place later this month in Kazakhstan (on February 26) in the format of P5+1, and he has repeatedly said that it is for Iran to prove to the satisfaction of the international community that its nuclear programme is for exclusively peaceful purposes. So far they’ve failed to do that. So the onus is upon Iran. It was in that context that the Secretary-General was speaking with the Washington Post,” Nesirky said.

The P5+1 are the Security Council’s permanent members – US, UK, France, Russia and China – plus Germnay.

Asked why then Ban linked the Iranian case to North Korea’s, Nesirky said “I would not over interpret this … The Secretary General is simply pointing out the need for there to be accelerated progress in the talks, and another round of talks is to take place, and to reiterate that it is for Iran to prove to the satisfaction of the international community that the programme that they have is for peaceful purposes.” North Korea used the six-party talks to develop its nuclear programme. It conducted its third nuclear test last week and the Security Council is examining how to respond.

Iranian Ambassador Mohammad Khazaee told Ban in a letter last Friday that if the Washington Post report is accurate, “it would be very unfortunate that the Secretary General of the United Nations, in contravention of his mandate and against the well-established international principles, apparently has taken a position to the peaceful nature of Iran’s nuclear activities.” Khazaee also said “I look forward to working closely with you to address this issue of great concern. Undoubtedly, integrity, transparency, and fairness are key premises on which the Secretary-General should base his approach in discharging his Charter-mandated responsibilities”.

The Security Council imposed four rounds of sanctions on Iran for refusing to halt uranium enrichment activities. While the West fears Iran is working on building a nuclear bomb, Iran insists its programme is for peaceful purposes.

Representatives of the P5+1 meet occasionally with Iranian counterparts to dissuade the regime from pursuing its disputed nuclear activities.