US lawmakers meet with Iranian exiles in Paris 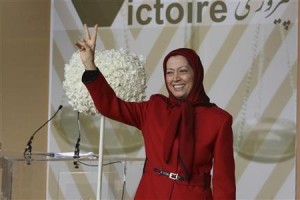 PARIS (AP) — With its militant wing no longer a terror organization as far as the U.S. government is concerned, an Iranian opposition group hosted a U.S. House delegation for the first time Sunday and briefed the lawmakers on the fallout of a deadly rocket attack at a refugee camp in Iraq.

The National Council of Resistance of Iran, a France-based Iranian opposition group, gave a raucous welcome at a Paris hotel to the four representatives, with rhythmic clapping and chants of “Thank You!”

But the talks focused on a Feb. 9 rocket attack at a refugee camp in Iraq that houses many of members of Mujahedeen-e-Khalq, or MEK, the group’s militant wing. Seven people died and dozens were wounded, the exile group said.

U.S. Rep. Dana Rohrabacher, a California Republican, accused Iraq of breaking its promise to help protect the 3,100 refugees who now live on the former American military base known as Camp Liberty. He said he hopes the attack will help accelerate international efforts to resettle them abroad, while issuing a warning to the government of Iraqi Prime Minister Nouri al-Maliki.

“Put everybody on notice – and I think I speak for our whole delegation. … If there is another attack on these helpless refugees by the government, obviously cleared by the government of Iraq, we will move in the United States Congress and put forward a resolution not only just condemning the act but declaring Prime Minister Maliki and his government state sponsors of terrorism,” Rohrabacher told reporters.

Iraq’s Shiite-led, pro-Iranian government considers MEK a terrorist group and wants the international community to speed up the resettlement of the refugees elsewhere. NCRI officials say only a handful of refugees have been resettled.

The refugee camp is meant to be a temporary way station while the United Nations works to find host countries for the refugees. They are unlikely to return to Iran because of their opposition to the Islamic regime. Before being moved to the Baghdad area camp, members of the MEK lived in another camp, called Ashraf, in northeastern Iraq – itself the hub of deadly violence in the past.

The MEK, which is also called the People’s Mujahedeen of Iran, opposes Iran’s clerical regime and has carried out assassinations and bombings in Iran. It fought in the 1980s alongside Saddam Hussein’s forces in the Iran-Iraq war, and several thousand of its members were given sanctuary in Iraq by Saddam. The group renounced violence in 2001 and the Obama administration took the MEK off the U.S. terrorism list in September.

“It was our belief that once we took that unwarranted designation off the MEK, that it would help facilitate the transfer of these helpless and defenseless refugees … to safe havens in other countries,” said Rohrabacher, who heads the subcommittee on Europe, Eurasia and Emerging Threats of the House Foreign Affairs committee. “I personally am disappointed in our government – and other governments – that we have not stepped forward more quickly to do this. Hopefully this attack, this murder of these innocent and unarmed people will speed up this process.”

But Maryam Rajavi, president-elect of the National Council of Resistance of Iran, said through a spokesman that “there has been no change in resettlement since last week” and “a similar attack can take place any day and any minute.”

Rohrabacher all but accused Iran of a hand in the Feb. 9 killings.

“We have to assume that the Iranian government and the Iraqi government are working together in order to murder unarmed opponents of the Iranian regime. I don’t believe that it is irrational for anyone to think that this act of terrorism that results in the death of these innocent people isn’t a calculated effort,” he said.