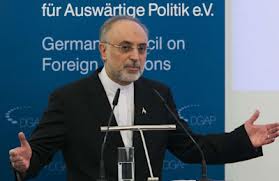 TEHRAN – Iranian Foreign Minister Ali Akbar Salehi has reiterated the possibility of direct negotiations with the United States, although his statement was less enthusiastic than comments he made in Germany 10 days ago. In an interview with the semi-official Mehr News agency published Saturday, he basically said that it’s up to the country’s supreme leader, Ayatollah Ali Khamenei, to decide whether Iran will talk.

I read this, like Ahmadinejad’s speech last Sunday, as trying to bring Khamenei back into the dialogue as the decider. We should fully expect more developments on this leading up to the planned multi-nation talks in Kazakhstan on Feb. 26. Here’s the Mehr News report:

TEHRAN, Feb. 16 (MNA) –Iran Foreign Minister says that if the US proves that their intentions are true and honest, Iran will consider it with positive view.

In an interview with Mehr News, Ali Akbar Salehi pointed to the final status of negotiation proposal by the US and said “we have two types of negotiations with the US, one is that we have comprehensive discussion on the political relationship, Supreme Leader will decide holding or not holding this kind of negotiation, and it is part of his authorities, and of course we have not had any such discussion, and if the time and conditions are ready, the Supreme Leader will decide about that.”

He also asserted that “even the thematic negotiations are done with Leader’s discretion and not anyone on his own can start a negotiation with the US.”

It seems as if Iranian officials know they need to start talking but want to make the supreme leader more of a focal point. And this seems in line with the idea that Khamenei wants progress but doesn’t want a deal until after the June presidential election.