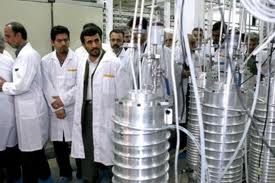 Iran recently sought to acquire tens of thousands of highly specialized magnets used in centrifuge machines, according to experts and diplomats, a sign that the country may be planning a major expansion of its nuclear program that could shorten the path to an atomic weapons capability.

Purchase orders obtained by nuclear researchers show an attempt by Iranian agents to buy 100,000 of the ring-shaped magnets — which are banned from export to Iran under U.N. resolutions — from China about a year ago, those familiar with the effort said. It is unclear whether the attempt succeeded.

Although Iran has frequently sought to buy banned items from foreign vendors, this case is considered unusual because of the order’s specificity and sheer size — enough magnets in theory to outfit 50,000 new centrifuges, or nearly five times the number that Iran currently operates.

The revelation of the new orders for nuclear-sensitive parts coincides with Iran’s announcement that it plans to add thousands of more-advanced, second-generation centrifuges that would allow it to ramp up its production of enriched uranium even further, analysts said.

Iran insists that its nuclear program is peaceful and that its enrichment efforts are directed toward medical research and energy production. The disclosure of the purchase attempt comes at a time when the country is seeking to gain diplomatic leverage ahead of negotiations on proposed limits to its nuclear program.

The attempt, nonetheless, has fueled Western concerns that Iran is planning a major expansion in its nuclear capacity that would allow it to make atomic weapons quickly if it chooses to do so.

“They are positioning themselves to make a lot of nuclear progress quickly,” said a European diplomat with access to sensitive intelligence on Iran’s nuclear facilities, speaking on the condition of anonymity because of the sensitivity of the matter. “Each step forward makes the situation potentially more dangerous.”

A shrinking of Iran’s timeline for obtaining a weapons capability could increase pressure on Israel, which in recent months has appeared to ease off from threats of a preemptive strike on Iran’s nuclear facilities.In a speech Monday to American Jewish leaders, Israeli Prime Minister Benjamin Netanyahu said Iran had not crossed the “red line” that would warrant a military strike, but he said the country’ s recent nuclear advances “shorten the time it will take them to cross that line.”

Complicating Israel’s calculus, Iran has simultaneously taken steps to ease Western anxiety over its nuclear program, chiefly by converting a portion of its uranium stockpile into a metal form that cannot be easily used to make nuclear weapons. A Foreign Ministry spokesman confirmed Tuesday that the conversion of some of Iran’s uranium stockpile was underway. “This work is being done,” the spokesman, Ramin Mehmanparast, told reporters in Tehran.

A report by the U.N. nuclear watchdog, due for release this week, is expected to document Iran’s seemingly contradictory moves, portraying the country as carefully avoiding provocative behavior even as it quietly prepares to increase production at its two uranium-enrichment plants.

Engineers recently installed more than 1,000 new IR-1 centrifuge machines at Iran’s largest uranium plant, near the city of Natanz, adding to the roughly 9,000 IR-1 machines currently in operation, said officials of the International Atomic Energy Agency. An additional 2,800 IR-1s have been installed near the city of Qom at a small enrichment plant built beneath a mountain to shield it against airstrikes. But most of the machines are not operational.

Iran has sought to acquire a long list of sensitive materials in recent months, U.S. officials said. In October, federal prosectors secured a guilty plea from a Texas-based Taiwanese national who was charged with helping Iran obtain more than 100,000 parts from U.S. companies over a five-year period, including electronics used in nuclear installations and in missile guidance systems.

The purchase order for the magnets — copies of which were obtained by the Washington-based Institute for Science and International Security and shown to The Washington Post — suggests that a vastly larger expansion could be just over the horizon.

The specific dimensions spelled out in the order form match precisely — to a fraction of a millimeter — those of the powerful magnets used in the IR-1, a machine that spins at supersonic speeds to purify uranium gas into an enriched form that can be used in nuclear power plants. With further processing, the same machines can produce highly enriched uranium for nuclear weapons.

With two magnets needed per machine, the order technically could supply Iran with enough material for 50,000 new gas centrifuges, although some of the magnets would probably have been reserved for repairs and spare parts, said David Albright, ISIS president and a former IAEA inspector.

“It implies that they want to build a lot more centrifuges,” he said.

The magnets are made of an unusual alloy known as barium strontium ferrite and were ordered from a Chinese vendor in late 2011. The order was placed by an Iranian businessman, who said the magnets were needed for a “great factory” engaged in a “new project” inside Iran, according to the online order.

U.S. intelligence officials declined to comment on the specifics of the magnets case. One official who closely tracks Iranian procurement efforts said Iran still actively seeks banned technology from a variety of foreign vendors, often using front companies and cover stories to conceal the intended use of the materials it buys.

According to the ISIS investigation, the company that placed the order had been previously linked to Iranian efforts to acquire sensitive technology. The Canadian government placed the firm under sanctions late last year because of unspecified proliferation concerns.

Independent nuclear experts who reviewed the magnets case generally backed the ISIS conclusions. Olli Heinonen, who led IAEA nuclear inspections inside Iran before his retirement in 2010, said the type of magnet sought by Iran was highly specific to the IR-1 centrifuge and could not, for example, be used in the advanced IR-2M centrifuges that Iran has recently tested.

“The numbers in the order make sense, because Iran originally told us it wanted to build more than 50,000 of the IR-1s,” Heinonen said. “The failure rate on these machines is 10 percent a year, so you need a surplus.”

Nonetheless, Iran has avoided what many experts consider Israel’s new “red line”: a stockpile of medium-enriched uranium greater than 530 pounds, roughly the amount needed to build a weapon if further purified. At the current pace, Iran could reach that theoretical threshold by the middle of next year, said a Western diplomat privy to internal IAEA reports on Iran’s nuclear progress.

“Adding new machines just means you get there a lot faster,” the diplomat said.