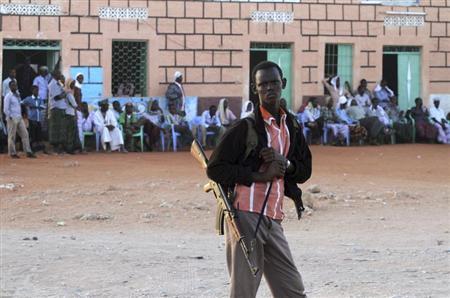 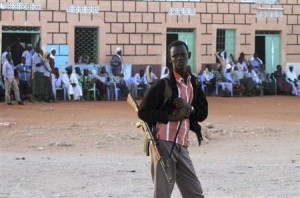 (Reuters) – Iran has denied allegations that it has been supplying Islamist militants in Somalia with weapons, describing the charges as “absurd fabrications,” according to a letter obtained by Reuters on Thursday.

As the United States pushes for an end to the U.N. arms embargo on Somalia, U.N. monitors following Somalia sanctions are warning that Islamist militants in the Horn of Africa nation are receiving weapons from distribution networks linked to Yemen and Iran, diplomats told Reuters.

According to the latest findings by the U.N. Security Council’s monitoring group, which tracks compliance with U.N. sanctions on Somalia and Eritrea, most illicit arms are coming into northern Somalia – that is, the autonomous Puntland and Somaliland regions – after which they are moved farther south into strongholds of Islamist al Shabaab militants.

“The allegations of arm transfers from Iran to Somalia are absurd fabrications and have no basis or validity,” Iran’s U.N. mission wrote to the U.N. Security Council in a letter obtained by Reuters. “Thus it is categorically rejected by the Government of the Islamic Republic of Iran.”

“It is unfortunate that the Monitoring Group has, in an obvious irresponsible manner, put such unfounded allegations and strange fabrications in its report, without first bothering itself to communicate them to my Government,” Iran’s U.N. Ambassador Mohammad Khazaee wrote to the council.

“It is further regrettable that the content of the report is leaked to the media for propaganda purposes,” he wrote. “This malicious campaign, which is done in the name of the United Nations, endangers the credibility of the Security Council along with that of the United Nations.”

The monitoring team’s concerns about Iranian and Yemeni links to arms supplies for al Shabaab militants come as Yemen is asking Tehran to stop backing armed groups on Yemeni soil. Last month the Yemeni coast guard and the U.S. Navy seized a consignment of missiles and rockets the Sanaa government says were sent by Iran.

According to the monitoring group, the supply chains in Yemen that provide al Shabaab with arms are largely Somali networks, council diplomats said on condition of anonymity.

Yemen is just across the Gulf of Aden from Somalia’s northern coast, making it easy to move all kinds of goods – legal and illegal – from the Middle East into Somaliland and Puntland.

Iran’s U.N. mission also wrote to the council regarding the allegations about the ship containing arms bound for Yemen. It denied responsibility for those weapons.

“It has been further claimed that the items seized on board … the ship were produced in Iran,” Khazaee wrote in a separate letter to the council. “Even if some of these items were made in Iran, this does not provide any evidence that Iran was involved in the shipment of arms to Yemen.”

It is a position that has the strong backing of the United States, which is pushing for an end to the 21-year-old U.N. arms embargo. The Security Council imposed it in 1992 to cut the flow of arms to feuding warlords, who a year earlier had ousted dictator Mohamed Siad Barre and plunged Somalia into civil war.

France and Britain oppose lifting the arms embargo for the government, U.N. diplomats say, and would prefer a more gradual easing of the restrictions on arms sales to Somalia’s government.