To help Syria, talk first to Iran and Saudi Arabia 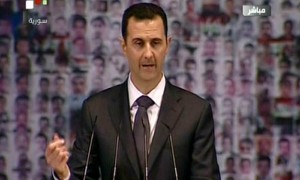 News that the Assad government is ready to send a minister abroad for talks with the leader of the opposition Syrian National Coalition raises some hope that a negotiated solution might be possible in Syria. But the violence was fuelled right from the beginning by both domestic politics and regional geopolitical rivalries. At a local level those protesting had been caught up in the momentum of the Arab spring. They were calling for political empowerment, dignity and more control over their lives. The heavy-handed response of the government was to sow the seeds for a civil war.

But the scene was already set as a result of a key dynamic in the region: the rivalry between Iran and Saudi Arabia, which will be a crucial element in defining the future shape of the region. There are other forces at work, and Russia and the US are still influential, but future power brokers will have to address the regional mutations under way.

Today’s Syria was invented by the colonial powers. It is the fruit of the 1916 Sykes-Picot agreement, and of the first world war. A century on, not only has the architecture of the cold war come and gone, the Levantover the last 50 years or so has also seen a decline of the influence of outside powers and an increase in activism among the Gulf states.

Part of the shift in the regional dynamic has been precipitated by the strengthening of Iran’s influence in Iraq as a result of western removal of the secular government in Iraq in 2003. There are now much closer links between the two countries, which has opened the door to the return of Shia power in Iraq. This change is not acceptable to the Saudis, but war is not the only solution. Iranian flexibility in Syria, and Saudi flexibility in Iraq, could offer a way through without further conflict. Recognising the regional power play between Saudi Arabia and Iran is more likely to put an end to a Syria’s civil war than any military option.

But if this is to be achieved peaceably, quiet behind-the-scenes mediation by credible actors will be required to engage both Iran and Saudi Arabia. One of the key objectives would be to avoid a major confrontation between Riyadh and Tehran which would lead to a clash of Sunnis and Shias along the Tigris and the Euphrates.

A separate negotiating process, between the US and Russia, with some possible input from China, will also be necessary. This could help prepare international support for the new architecture, which would ultimately need to be decided by regional players. A second level would be needed to follow up on the informal negotiations between Iran and Saudi Arabia as the regional guarantors.

Once progress is being made at those two levels, the third level of negotiations among Syrians would have a better chance of succeeding. Not least because the flow of money and weapons both to the government and the opposition will have been addressed. Whether President Assad stays or remains need not to be a precondition but a rather a result of the negotiations, and an outcome of an agreement by the parties.

An all-Syrian table of negotiators will have more chance of achieving success, or of even being convened, when all the different Syrian groupings are aware of understandings reached by Moscow and Washington, and even more so of those between Tehran and Riyadh. The two non-Syrian tables will help to avoid the spreading of a conflict outside Syria’s borders, which is the real immediate danger.

Part of any future agreement will involve the redistribution of power so that minority groups can no longer monopolise the lives of the majority. One of the features of colonialism and the drawing of the regional map in 1916 was the colonial power support for the leadership of minorities. This is no longer acceptable. A rebalancing may now involve the redrawing of the political architecture of the Levant by the inhabitants of the region.

Those involved in mediation would need to encourage a different kind of culture, in which the inevitable regional changes are not brought about by hostility and body bags. A new modus vivendi will need to be established in which Shiism would have to relinquish its dominion in Syria in exchange for its domination in Iraq. An accommodation will have to be found in which there is genuine participation for minority groups in both countries and a new understanding of the concept of identity.

A new architecture for the Levant cannot be rooted in identities that “need to kill” in order to exist. Efforts are more likely be successful if pursued by those who are familiar with the national and individual narrative of the region and not just the “realpolitik” of an architecture which is no more.