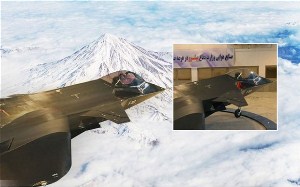 Iran has been accused of dissembling after a picture apparently showing its latest fighter jet patrolling the skies was dismissed as a fake.

Iranian bloggers were quick to claim that the picture, which purports to show the Qaher-313 jet soaring over a snowy mountain and which was posted on Iranian site Khouz News, had been altered using PhotoShop.

The angle of the shot, as well as the reflections of light and shadows on the plane’s wings, appear uncannily similar to a publicity shot of the jet taken at its unveiling earlier this month.

The Qaher-313, unveiled this month in a special ceremony attended by President Ahmadinejad, is the second plane to be apparently produced by Iran.

The plane is said to combine the distinctive features of two of the US’s main fighter jets, the F-35 and the F-22.

Experts have said the plane seen at the unveiling seemed to be a large model replica rather than a working prototype.

David Cenciotti, who writes for the Aviationist blog, said the cockpit appeared to be too small for a human pilot, and was filled with controls “of a type you expect to find on small private planes”.

The plane appeared to be made out of plastic, lacking “the characteristic rivets [and] bolts all aircraft, including stealthy ones, feature”.

He added: “The air intakes are extremely small whereas the engine section lacks any kind of nozzle: engine afterburners could melt the entire jet”.

Foreign Policy’s John Reed said: “It’s seriously unlikely that such an aircraft has room to carry the avionics, radars, electronic countermeasures, heat masking gear, and, most importantly for a fighter, the weapons that make modern stealth jets effective.”

The fighter jet was shown to million-strong crowds at the February 11 rallies, held annually to commemorate the Islamic Revolution of 1979.

Earlier this month, Iran was also accused of prevaricating on claims it sent a monkey into space after pictures taken before and after the launch appeared to show different monkeys.

Tehran later claimed that the news agency that published the first set of images had mistakenly used a photograph of the wrong monkey.

Iran has been known to fake technological achievements. Last year it claimed to have built the Koker 1, the world’s first vertically launching drone.

It later emerged that the vehicle had been built and launched by a team from Chiba University, Japan, in 2008.