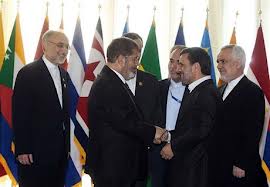 Iranian President Mahmoud Ahmadinejad did not expect that series of prohibitive demands from al-Azhar: the rights of Sunnis in Iran, the rights of the Arabs in Khuzestan, non-interference in Bahrain’s affairs, stopping the bloodshed in Syria and ceasing the spread of Shiism in Sunni countries.

Ahmadinejad’s visit to Cairo to attend the Organization of Islamic Cooperation (OIC) summit took the spotlight away from the summit itself. The visit was the first by a sitting Iranian president. It signaled that the troubled relationship between the two major eastern poles has improved. That relationship has been troubled for more than three decades.

The grandiose airport reception that Ahmadinejad received from his Egyptian counterpart triggered speculation that relations between the two countries was about to resume and that a new regional axis that would break the existing regional balance is about to be born. But the Iranian president’s meeting with Al-Azhar Mosque’s Grand Sheikh poured cold water on Iranian dreams. What are the future Egyptian-Iranian relations after Ahmadinejad’s visit to Cairo? What are the shortcomings in Egypt’s new regional policy as revealed by the Iranian president’s visit? We will try to answer those questions below.

The future of Egyptian-Iranian relations

The Iranian president chose to stop by al-Azhar immediately after meeting with Egyptian President Mohammed Morsi because Tehran wants to build on al-Azhar’s illustrious history, bring closer the followers of different Islamic sects and ease the sectarian tension in the region between Sunnis and Shiites.

Religion plays a role in Iranian politics because religion is in the Iranian constitution and part of the country’s practice for more than three decades. So it was thought that Egypt becoming more religious would form common ground between Tehran and Cairo. Yet the sectarian tension plaguing the region for years, and for which all parties are to blame, has unfortunately become the main conflict in the Middle East.

The Iranian president sat next to al-Azhar Mosque’s Grand Imam Ahmed al-Tayeb and raised the victory sign with his hand in front of the cameras, but then the mood quickly changed. Ahmadinejad was surprised that the joint press conference was attended not by Tayeb, but by his advisor Sheikh Hassan al-Shafei, who then listed a series of demands from Iran: the rights of the Sunnis in Iran, the rights of the Arabs in Khuzestan, non-interference in Bahrain’s affairs, stopping the bloodshed in Syria and ceasing the spread Shiism in Sunni countries. Those demands are in effect a list of accusations toward Iran’s policies in the region. However, to be fair, no Iranian politician, including Ahmadinejad, could agree to discuss such issues, especially those involving Iranian internal affairs (Arabs in Khuzestan and Sunnis in Iran).

Then Ahmadinejad’s visit got worse. A Salafist group verbally assaulted the Iranian president outside of al-Azhar. It seems those protesters are not aware that Egypt’s guests should never be insulted in any way shape or form. Respecting the guest is a fundamental Arab value that goes back to even before Islam.

Ahmadinejad’s disappointment with the al-Azhar meeting and the protest aside, Iran was still able to score a goal against its opponents. It showed the region and the world that economic sanctions are not preventing regional doors that have for decades been shut in Iran’s face from opening up. Egypt was and will remain the biggest Arab country. Egypt scored a goal against its opponents in the Gulf by brandishing its relations with Iran. But the Egyptian government is using its relations with Iran to score short-term goals in a way that does not befit Iran’s regional importance.

So it seems that President Morsi’s administration does not really wish to upgrade its relations with Iran but only use them against the Gulf states. In addition, it will be difficult for the Egyptian administration to go further in its relations with Iran because of the price Egypt would have to pay. To expand its relations with Egypt, Iran is only paying an internal price: the various Iranian political wings must agree with each other on the nature of these relations. But Egypt’s price would be much higher. The Muslim Brotherhood would have to pay both an internal and an external price. One, their Salafist ally will hinder any rapprochement with Iran. Two, the alliance between Turkey and Qatar will also hinder a rapprochement. So Egyptian-Iranian relations will show limited improvement in the next phase. There will be neither estrangement nor a regional partnership. The latter is not realistic in light of the current balance of forces nor with the way Morsi is managing the Iranian file.

Ahmadinejad’s visit to Cairo revealed three shortcomings: the first is about transparency. Who is setting Egyptian foreign policy? In Mubarak’s days, the president and the security agencies used to set the relations with Iran. But who is doing that now? That is a valid question given that the president’s foreign affairs advisor is a former foreign relations official for the Muslim Brotherhood’s international wing.

The second shortcoming is about Egypt’s agenda. How does the current administration define Egyptian national interests? And what are Egypt’s regional and national priorities?

That was directly followed by a visit to Egypt from Iranian Foreign Minister Ali Akbar Salehi then from Ahmadinejad. It is clear the current Egyptian administration lacks political imagination. Egypt needs no one’s permission to upgrade its relations with Iran, but upgraded relations with Iran should complement Egypt’s influence in the region, not compensate for lost influence elsewhere.

Iran, Turkey and a twist of fate

Replacing the Arab facade of the region with a purely religious one will open the way for regional non-Arab powers to play more than political roles and start interfering in Arab internal affairs. The Arab countries will be weaker relative to other countries in the region. It would be unfortunate to fail to achieve Egyptian-Iranian and Egyptian-Turkish convergence that would serve Egyptian and Arab interests. The former Egyptian regime closed the doors to any attempt for rapprochement with Iran or Turkey. It tried to avoid potential dangers and thus could not seize opportunities. It is unfortunate to see Egypt after the revolution open those doors only for tactical purposes, without a specific agenda that defines Egyptian national interests.

Relations with Iran are important and necessary to diversify Egypt’s regional relations. Yet the purpose of Egypt’s relations with any country, including Iran, is not for its own sake but only to serve Egypt’s national interest, which does not necessarily match the interests of a political current, even the Muslim Brotherhood.

What a weird twist of fate: The great Egyptian people rose up against their government because their country’s regional and international status declined under its rule and because it was a mere satellite of the U.S. administration, and now they are being asked to rise up, again, because their country’s foreign policy is being tailored to the interests of a particular political group. The new Brotherhood regime is in orbit around America’s regional clients, be they big or small!