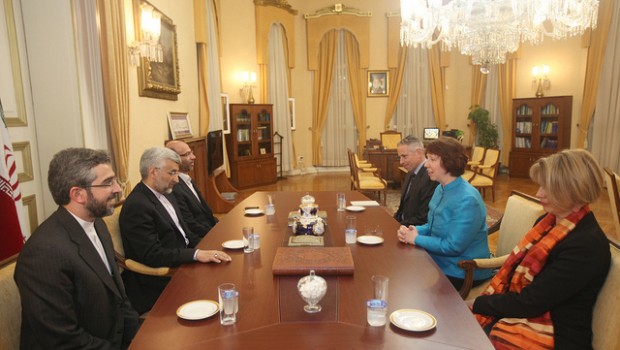 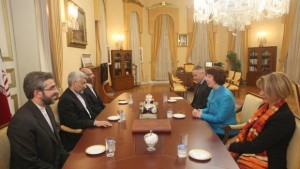 Last year, Iran announced that it had put forward a five-point plan based on proposals outlined by Russian Foreign Minister Sergei Lavrov in 2011, Salehi said in an exclusive interview inside Iran’s Foreign Ministry.

Lavrov’s plan had suggested a gradual easing of economic sanctions against Tehran in exchange for its increased collaboration with the International Atomic Energy Agency (IAEA), the Vienna-based global nuclear watchdog.

But the European Union has pitched a separate three-step plan, announced last month, for the nuclear program, Salehi said.

“Now the negotiating parties will try to find common ground between the two plans,” he added through an interpreter.

Salehi refused to elaborate on either plan’s details, but said that reconciling them would be the main focus of the meeting set for February 26 between Iran and the P5+1 group of countries involved in negotiations on Iran’s nuclear program.

The P5+1, comprising the five permanent members of the United Nations Security Council – China, France, Russia, the United Kingdom and the United States – as well as Germany, is set to hold the meeting in Kazakhstan’s former capital, Almaty. The group last met in June 2012, but made no breakthroughs.

Salehi also confirmed that Iran would not, for the time being, take up the US offer of direct bilateral talks, floated earlier this month by US Vice President Joe Biden and rebuffed by Iran’s Supreme Leader Ali Khamenei. But he added that such talks are possible in the unspecified future, if the United States gives up its “policies of threats and pressure.”

“You may say that their rhetoric has changed, becoming more positive. But it is still not enough yet,” Salehi said.

A number of Western countries have expressed fears that Iran’s nuclear program is aimed at creating weapons, while Tehran insists it is purely peaceful and in line with international treaties.

Iran’s Foreign Ministry had said earlier that Salehi was set to hold talks in Moscow with his Russian counterpart, Lavrov, but Salehi himself denied this in the interview, saying he is only going to Russia to participate in a meeting of a joint commission on bilateral economic cooperation.

A number of agreements, including ones on trade, oil and agriculture, will be on the table during the meetings, set to be held in Moscow on Monday evening and Tuesday, Salehi said. He declined to give details prior to the talks.

Bilateral trade between Russia and Iran stood at $3.4 billion, or 0.3 percent of Russia’s total foreign trade turnover, between January and November 2012, according to Russia’s Federal Customs Service.