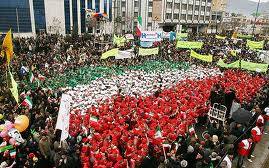 On February 11, Iran will mark the 34th anniversary of the Islamic Revolution. What are Iran’s successes?

The Islamic Republic is now a regional power, thanks to three decades of social, economic, diplomatic, and military advancements. But not all of these successes are clear-cut. Many of Iran’s achievements actually created new challenges or even led to political and diplomatic failures.

One of Iran’s greatest successes is the dramatic expansion of its middle class. Many professionals, white collar workers, and skilled laborers from modest backgrounds entered the middle class during the 1980-1988 war with Iraq, when the country faced growing international isolation. The distribution of oil wealth helped spur along this process.

The state’s health, education and welfare initiatives also played a major role in expanding the middle class. Iran dramatically lowered its fertility rate with a progressive family planning program. The rate dropped from 6.6 births per woman in 1977 to 2 births per woman in 2000. The government expanded higher education and significantly increased literacy rates, especially among women. In 1998, two decades after the Islamic Revolution, Iran was cited as one of the top ten countries worldwide that had closed the gender gap in education.

Iran has also achieved some economic success over the last three decades. The Islamic Republic managed to pay off its various loans to American banks within two years of the 1979 revolution. The government used oil revenues to build highways, railways, factories, power plants, airports and other infrastructure.

In 2010, President Mahmoud Ahmadinejad launched a phased reform plan designed to cut back government subsidies of basic commodities dating back to the 1980s. It was the most extensive economic reform since the 2007 gas rationing plan. Subsidies have been a constant drain on the economy—accounting for about 25 percent of Iran’s gross domestic product (GDP). The government reportedly reformed 30 percent of subsidies before parliament suspended the second phase of reforms in November 2012.

The United States and its Western allies have isolated Iran economically and diplomatically. But this isolation has encouraged Tehran to pursue a pragmatic diplomatic strategy that has somewhat mitigated the impact of international sanctions.

Iran has built economic, trade and business relationships with non-Western powers such as China and Russia. Tehran has also sought ties with regional powers such as Brazil and Nigeria, and authoritarian states including North Korea, Syria and Venezuela. Iran has forged trade and financial links with Iraq, India, Malaysia, and even Thailand, to advance what it calls an “Eastern Policy.” The Islamic Republic now considers itself a leading non-Western power. In 2012, Tehran hosted the Non-Aligned Movement Summit, viewing it as an indicator of successful foreign policy.

Iran has emerged as a formidable military power in the Gulf. Even some key Arab Gulf states prefer to accommodate Tehran rather than support policies that could risk a military confrontation. The Islamic Republic’s regular military and non-conventional forces cannot match U.S. capabilities. But Iran has some deterrents, including a large stock of missiles and the ability to launch asymmetric attacks.

Iran’s military strength is partly rooted in the development of its nuclear program, which could be used for military purposes. Tehran’s success in the nuclear field is not only due to enriching uranium to 20 percent, but also to burying its nuclear facility at Fordo.

“Digging down” offers effective deterrence against an Israeli or U.S. airstrike, from the vantage point of Iran’s leaders. Israel probably lacks the necessary munitions to inflict lasting damage on sites such as Fordo. The United States would probably need to bomb Iran’s nuclear sites for weeks, which would likely drag it into an all out war. Tehran could then use its conventional and unconventional military assets, and proxy organizations like Hezbollah, to inflict damage on U.S. interests and allies. The regime almost certainly perceives the U.S. preference for a diplomatic solution as evidence of Iran’s military strength and deterrence capabilities.

The Islamic Republic has also succeeded in creating efficient security forces to clamp down on domestic unrest. In 2005, the Islamic Revolutionary Guards Corps (IRGC) was restructured into 31 separate commands – one for each province and one for Tehran. The Basij militia was integrated into the IRGC in July 2008. The intelligence services, police, and Basij now seem to be acting more coordinated under the direction of the IRGC.

What are Iran’s failures?

Many of Iran’s failures stem from its initial successes. For example, members of the expanded middle class are now disillusioned with the regime that helped them progress. Tehran succeeded in pursuing an independent foreign policy. But stubborn behavior costs it opportunities to improve its relationships with other nations, including the United States.

Iran’s modernization efforts produced groups which now reject or seek to reform the regime that made their ascent possible. Iran’s expanded middle class—particularly in the urban metropolis of Tehran—is literate, educated and worldly. Middle class Iranians seek legitimate political representation in a system that now limits or denies their participation. They envision a far more democratic system than would likely be tolerated by the regime and its most hardline supporters or “principlists.”

The regime has also lost legitimacy in the eyes of some women. For several years, more than 60 percent of the university student body was female. But women’s efforts to participate in politics and attain top positions in other fields have been stymied. In 2012, three dozen universities banned women from 77 academic fields, including accounting, chemistry, counseling, education, and engineering. Exclusionary practices and policies have alienated many women from the political sphere.

The regime’s increasing reliance on force, repression and intimidation has cost it the support of many bazaaris and members of the urban middle class. The 2009 repression of the Green Movement and marginalization of reformists have shrunk the regime’s power base. The movement’s leaders—former Speaker of Parliament Mehdi Karroubi and former Prime Minister Mir Hossein Mousavi—remain under house arrest despite their longstanding support of the regime. They failed to change the political system according to existing rules. Now the chasm between the regime and the urban middle class may be wider than ever. Without legitimacy, the regime is likely to continue relying on repression to survive.

The narrowing of the political field undermines the regime’s ability to manage the factional conflict, competition and negotiation that defines Iranian politics. The nation’s leaders now have fewer tools to deal with growing social, economic and political challenges.

Iran’s economy may be facing its most serious challenge since the 1994 debt crisis or the austerity of the 1980-1988 war with Iraq. Past governments have failed to “reach the third climax of the Islamic Revolution—economic progress and justice,” said Secretary of the Expediency Council and former Revolutionary Guards commander Mohsen Rezai in February 2013.

The nationalization of key industries and conversion of thousands of businesses into semi-governmental foundations (bonyads) devastated production immediately after the revolution. The centrally planned economy was and remains inefficient. Iran weathered sanctions and austerity during the 1980-1988 war with Iraq, and suffered from slow growth or stagnation for much of the 1990s. Price controls and subsidies still burden the economy, despite President Ahmadinejad’s efforts to cut them.

Iran has also failed to cope with double digit unemployment and high inflation. One U.S. dollar was worth about 70 rials before the 1979 revolution. Starting in the 1990s, the rial gradually devalued against the dollar. By 2000, the exchange rate had hit over 5,000 rials to the dollar.

International sanctions have added an unprecedented burden on the Islamic Republic’s economy. Oil exports were basically cut in half in 2012, further destabilizing the economy—oil revenues previously accounted for about 80 percent of Iran’s foreign currency revenue. The national budget deficit is now expected to increase to around 30 percent in March 2013, when the new Persian year will begin.

Iran’s first misstep in foreign affairs was its handling of the American hostage crisis. Iranian students stormed the U.S. Embassy in Tehran on November 4, 1979 and took 52 Americans hostage. Supreme Leader Ayatollah Ruhollah Khomeini then threw his support behind the students. The new republic faced international condemnation and isolation. Iran finally released the hostages 444 days later. But the 1981 Algiers Accord that ended the crisis only returned a fraction of Iran’s frozen assets from the United States. The cash loss to the Iranian treasury amounted to about $150 million per hostage.

Iran also mishandled the end game of the 1980-1988 war with Iraq. Khomeini stubbornly refused to give up earlier, preferring to push Iran’s armed forces and economy to their limit. He said that accepting the ceasefire was “deadlier than swallowing poison.” Khomeini probably could have ended the war sooner on similar to terms to the final agreement.

In 1989, Khomeini made another mistake by issuing a fatwa calling for the death of British author Salman Rushdie for his book “The Satanic Verses.” Iran cut off diplomatic relations with Britain, only to reestablish low level relations with it in 1990. The fatwa further damaged Iran’s international reputation. Western nations condemned the decree, claiming it violated universal human rights.

Under Iranian law, it is not clear if the government can revoke Khomeini’s ruling. But the regime has failed to cancel or lower the reward for Rushdie’s killing. In 1998, 150 out of 270 members of parliament reportedly signed an open letter stressing that the fatwa cannot be revoked. In 2012, a semi-official religious foundation increased the reward from $2.8 million to $3.3 million.

Tehran most likely does not view its nuclear policy as a failure. But the Islamic Republic is facing unprecedented economic sanctions because of its lack of transparency. Iran could comply with U.N. investigators and maintain nuclear reactors for medical research and producing power. Instead, Tehran has denied access to some of its facilities and continues to develop its program. Iran seems to have not yet decided whether or not to build a weapon. The regime’s goal may be to sign an agreement that allows it to maintain this strategic ambiguity. But this strategy is risky.

Tehran seems to think that Washington and its allies will not attack its nuclear sites. Iran’s leaders probably assume that they could bleed the United States, rally the nation, and consolidate power in the event of an attack. The Islamic Republic’s hard-liners count on tension with the United States to sustain their rule. Some of them may not view a U.S. attack as a strategic loss, rather as a validation of their revolutionary rhetoric. The line is thin between what some leaders might see as a success and what others might see as a failure.

This article was written by Daniel Brumberg for the Iran Primer on Saturday February 9, 2013. Daniel Brumberg is a senior adviser to the Center for Conflict Analysis and Prevention at USIP, where he also served as acting director of USIP’s Muslim World Initiative.