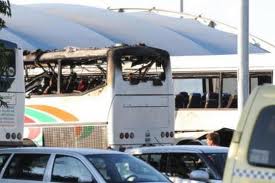 Iran has decided to lower its diplomatic relations with Bulgaria and recall its ambassador, after the Balkan country hinted that the Islamic Republic was involvement in a terror attack last year that killed six people, including five Israelis, Army Radio reported on Sunday.

Bulgaria has officially accused the Iranian-backed Hezbollah of carrying out the July attack, though it has not specifically blamed Tehran. Iran hasvehemently denied involvement in the incident: “This has nothing to do with Iran,” Iran’s Ambassador to Bulgaria Gholamreza Bageri told reporters last week. “We are against any form of terrorism and strongly condemn such actions.”

A Bulgarian investigation found two militants linked to Hezbollah to be responsible, and showed that the militant movement had financed the attack, the government in Sofia announced last week.

Meanwhile, on Sunday, Bulgaria’s foreign minister said he will brief his EU colleagues on the results of the probe.

The findings, announced on Tuesday, brought renewed pressure on the European Union from the United States, Israel and Canada to designate the group a terrorist organization and to crack down on its fundraising operations across Europe. The European Union, which regards Hezbollah as a legitimate political organization, has resisted such a move.

But the conclusions of the Bulgarian investigation may open the way for the European Union to join the United States in branding Hezbollah a terrorist organization since there is now a clear connection to an attack on EU territory.

Foreign Minister Nikolay Mladenov says that in the February 18 meeting Bulgaria’s position will be made clear.

Israeli Prime Minister Benjamin Netanyahu called upon the European Union after the investigation not to differentiate between Hezbollah’s military wing and its political wing, which has joined the Lebanese government.

“There is only one Hezbollah. It is one organization with one leadership,” Netanyahu said in a statement.

He also said that the Bulgarian probe is “further confirmation of what we already knew, that Hezbollah and its patron, Iran, are waging a global terror campaign across borders and continents.”

“The attack in Burgas was an attack on European soil against a member of the European Union,” Netanyahu said. “We hope the Europeans will draw the necessary conclusions about the true character of Hezbollah.”