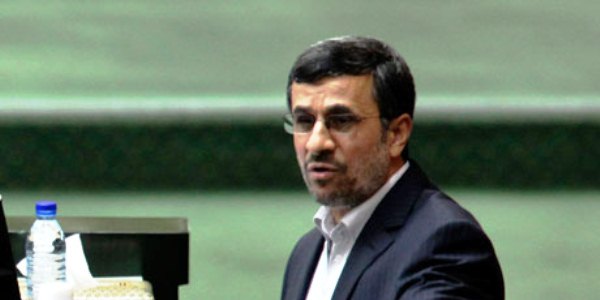 Mahmoud Ahmadinejad says Iran ready for nuclear talks with US

Iran’s president, Mahmoud Ahmadinejad, said Sunday that he is ready to have talks with United States if the West stops pressuring his country.

Iranian president Mahmoud Ahmadinejad is in the final months of his term in office. Photograph: Vahid Salemi/AP

His remarks constituted the latest in a series of hints from leaders in both Washington and Tehran about the prospect of direct bilateral negotiations over the Islamic Republic’s controversial nuclear program.

However, Washington is highly unlikely to relax sanctions on Iran and Tehran’s supreme leader, Ayatollah Ali Khamenei, who has final say on key state decisions, says that his country won’t negotiate under threat. This makes it hard to envision how talks could take place.

Ahmadinejad is in his final months of his term of office and his followers are weakened by a feud with the Islamic Republic’s clerical establishment. His latest statement, which implies that he is an equal player with Khamenei in foreign policy matters, may simply be an attempt to appear as though he is still politically relevant.

“You pull away the gun from the face of the Iranian nation, and I myself will enter the talks with
you,” Ahmadinejad said at a ceremony marking the 34th anniversary of the 1979 revolution that toppled a Western-backed monarch and ushered in the Islamic Republic.

He said the West had recently taken a “better” tone toward Iran a nod to statements made by vice president Joe Biden last week, in which he said the United States was prepared talk directly to Iran. But the Iranian president said this was not enough. The West claims Iran’s nuclear activities are aimed at developing weapons. Iran denies it seeks atomic arms, saying its nuclear fuel is only for energy-producing reactors and medical applications, and insists that its operations will continue.

“The Iranian nation will not give up one iota of its rights,” Ahmadinejad said. “Your efforts had aimed at preventing us from become nuclear, but we did.”

However Ahmadinejad admitted that sanctions have taken a bite. “Today, because of dishonorable pressure by enemies, people are under pressure. The government is concerned about the uneasy situation of a big portion of the country.”

“God willing, soon Iran’s satellite will be located at an orbit at [an altitude of] 36,000 kilometers [22,000 miles] next to others from four or five advanced powers and it will relay a message of peace and fidelity to all world,” said Ahmadinejad.

Iran regularly announces technological breakthroughs, most of which are impossible to verify independently. Iran says it has launched small satellites to low orbits of up to 450 kilometers [280 miles]. In January, Iran claims it sent a monkey into suborbital space and recovered the animal safely. It says it hopes to send astronauts to orbit by 2018. Iran displayed a model of the Pishgam rocket, which the country says it used to send the monkey into space, in a corner of Tehran’s Azadi Square where demonstrators gathered to listen to the president.

The West fears that technology Iran’s space program can be used to develop long-range missiles.

State TV meanwhile broadcast rallies throughout the country to mark the anniversary. Many demonstrators chanted “Down with the US” and “Death to Israel”, slogans traditionally used to denounce the Islamic Republic’s arch-enemies.