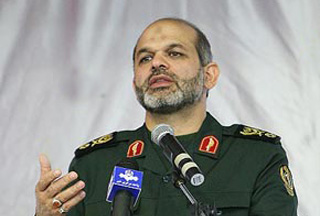 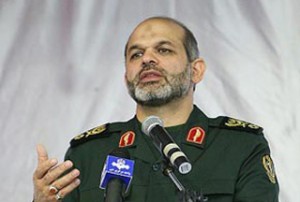 “Our newest combat drone with the capability of launching air-to-air missiles is in its final stages of production and will be unveiled in future,” Vahidi said on Saturday.

“Today, we are producing more than 20 models of drones in the country in different sectors of reconnaissance and combat, some of which have high flight endurance,” the Iranian defense minister added.

“Our reconnaissance drones are able to take clearest of pictures of the enemies’ measures and movements by flying over their positions,” Vahidi said.

Brigadier General Farzad Esmaili said earlier in the day that an indigenous radar-evading unmanned aerial vehicle (UAV) will be unveiled on April 18 on the National Army Day.

Deputy Head of the Industry and Research Institute of the Iranian Defense Ministry, Mohammad Eslami said on Wednesday that Iran plans to unveil the latest Iranian long-range strategic drone on May 24.

In September 2012, the country also unveiled a new indigenous UAV with a 24-hour nonstop flight capability.