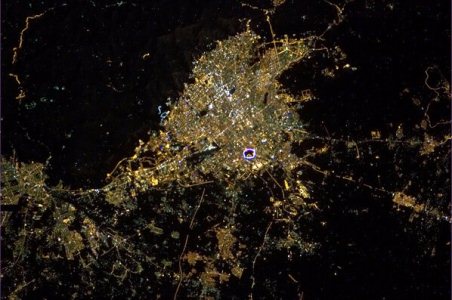 A Canadian astronaut posted a satellite image from Tehran on Twitter and asked a question about the blue light that is seen in the picture.

He has also asked a question about the mysterious bright blue light that is seen in the picture. He asked, “Does anyone know what the bright blue oval is?”

There was no immediate answer to his question.

Chris Hadfield is a Canadian astronaut who was the first Canadian to walk in space. Hadfield has flown two space shuttle missions, STS-74 in 1995 and STS-100 in 2001, and served as capsule communicator for both Space Shuttle and International Space Station (ISS) expeditions. On 19 December 2012, He launched in the Soyuz TMA-07M flight for a long duration stay on board the ISS as part of Expedition 35. He arrived at the station on 21 December as scheduled, and will become the first Canadian to command the ISS when the crew of Expedition 34 departs.