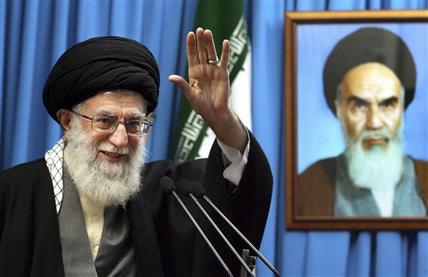 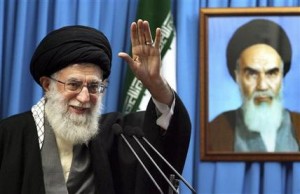 TEHRAN, Iran (AP) — American proposals for direct talks with Iran are pointless while Washington is “holding a gun” to the country through sanctions, Iran’s supreme leader said Thursday, quashing a possible breakthrough in contacts with the West over the nuclear standoff.

The message from Ayatollah Ali Khamenei, who has the final say in all major decisions in Iran, was reiterated by Iranian President Mahmoud Ahmadinejad during a news conference in Cairo later in the day.

Their dismissal of one-on-one dialogue raises the stakes when wider negotiations between Iran and world powers, including the United States, resume this month.

Another dead-end round – after three stalemated sessions last year – could fuel accusations by Israel and others that Iran is using the talks as a stalling tactic while it gets closer to having the capabilities to build a nuclear weapon.

Israeli Prime Minister Benjamin Netanyahu has warned that the world has until this summer – at the latest – to keep Iran from building a bomb. He’s hinted that Israel could attack unilaterally if all other efforts fail.

Iran denies it seeks atomic arms, saying its nuclear fuel is only for energy-producing reactors and medical applications. Iran officials have frequently called attention to a religious edict by Khamenei that says nuclear arms are contrary to Islamic beliefs.

“Talks are held to arrive at an understanding, not to impose anything,” Ahmadinejad said. “Such talks will be meaningless if someone raises a club and imposes” something on Iran, he added.

Talks would be productive only if they were based on mutual respect, he said. “Things will be fine if the Americans correct the manner in which they address us.”

The earlier comments by Khamenei were his first public reaction since a White House offer of direct dialogue received a high-profile boost this week from U.S. Vice President Joe Biden during a security summit in Munich attended by Iran’s foreign minister.

“Talks will not solve any problems,” Khamenei said in comments posted on his website.

“You are holding a gun against Iran saying, `Talks or you’ll fire.’ The Iranian nation will not be frightened by such threats,” Khamenei added in a reference to U.S. sanctions over Iran’s nuclear efforts.

The U.S. this week further tightened sanctions, which have already slashed Iran’s oil revenue by 45 percent. The new measures seek to cut deeper into Iran’s ability to get oil revenue. It calls on countries that buy Iranian crude – mostly Asian nations including China and India – not to transfer money directly to Iran and instead place it in local accounts.

Thursday’s comments followed another jab at the United States: This week Iran’s state TV broadcast a video allegedly extracted from an advanced CIA spy drone captured in December 2011 after crossing into Iranian airspace from Afghanistan. Iran has long claimed it managed to reverse-engineer the RQ-170 Sentinel, and that it’s now capable of launching its own production line for the unmanned aircraft.

After initially saying only that a drone had been lost near the Afghan-Iran border, American officials eventually confirmed that the Sentinel had been monitoring Iran’s military and nuclear facilities. Washington asked for it back but Iran refused, and instead released photos of Iranian officials studying the aircraft.

The video, which aired late Wednesday on Iranian state TV, shows an aerial view of an airport and a city, said to be a U.S. drone base and Kandahar, Afghanistan.

“We were able to definitively access the data of the drone, once we brought it down,” said the chief of the Revolutionary Guard’s airspace division, Gen. Amir Ali Hajizadeh, in the TV broadcast.

In an attempt to embarrass Washington, Iran has claimed to have captured several American drones, most recently in December, when Tehran said it seized a Boeing-designed ScanEagle drone – a less sophisticated aircraft – after it entered Iranian airspace over the Persian Gulf. U.S. officials said there was no evidence to support the latest claims.

Despite the tensions, American proposals for direct dialogue with Iran received a cautious welcome Sunday from Iran’s Foreign Minister Ali Akbar Salehi. But with caveats: Washington needs to quiet its “threatening rhetoric” for the offer to get real consideration by Tehran’s ruling clerics.

In his statement released following a meeting with air force commanders, Khamenei said: “They say the ball is in Iran’s court. The ball is in your court.”

“You have to be accountable and explain what it means to offer talks while simultaneously continuing pressure and threats.”

Washington has indicated in the past that it’s prepared to talk directly with Iran on the nuclear issue, but so far nothing has come of it.

Meanwhile, the talks between Iran and a powerful six-nation group – the permanent U.N. Security Council members and Germany – have made little headway. Three rounds last year ended in stalemate with Tehran pushing for a rollback of Western sanctions in exchange for any key concessions on its nuclear program.

“Time cannot be lost,” he said, according to the ITAR-Tass news agency. “A lot of time was missed and we would like to encourage our Iranian friends to take these talks very seriously.”

The U.S. and Iran broke ties after the storming of the American Embassy in Tehran in the wake of the 1979 Islamic Revolution. Iranian militants held 52 American hostages for 444 days.

“I am not a diplomat. I am a revolutionary and I express my words honestly,” Khamenei was quoted as saying.

He noted that some factions inside Iran seek direct U.S. talks because of their “naivety.” He did not elaborate, but called for the need to challenge U.S. efforts to return to “domination” over Iran – a reference to the pro-Western shah who was toppled during an Islamic revolution.

“Talk is meaningful if it is based on goodwill, equal standing and when both sides do not want to apply tricks,” said Khamenei. “Talk as a tactic, a gesture of superpower, is only a deceptive move.”

Khamenei, however, has shown some flexibility in the past over contacts with Washington. Iran and the U.S. have taken part in talks regarding Iraq and Afghanistan.