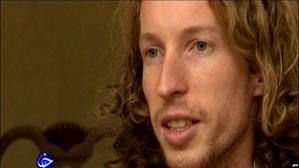 BRATISLAVA, Slovakia (AP) — A Slovak national arrested in Iran and accused of spying for the United States has been released and returned home.

Valuch, who was standing next to the minister at a news conference, denied he worked for the U.S. intelligence, saying “I am not a spy.”

He declined to take questions. Lajcak said Valuch would not talk about his Iranian experience in the future.

In a documentary broadcast in Iran, Valuch said he was recruited by a CIA agent and ran a job recruitment agency in Tehran as a front.