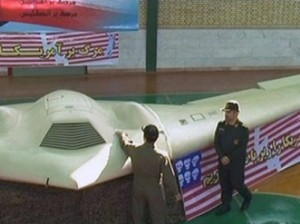 The video aired late Wednesday shows an aerial view of an airport and a city, said to be Kandahar, Afghanistan.

Iran has long claimed it managed to reverse-engineer the RQ-170 Sentinel and that it’s capable of launching its own production line for the unmanned aircraft.

The TV also showed images purported to be the Sentinel landing at a base in eastern Iran.

The Revolutionary Guard’s airspace chief, Gen. Amir Ali Hajizadeh, says in another part of the video that only after capturing the drone, Iran realized it “belongs to the CIA.”

Iran claims it “took control of the drone and landed it” but U.S. officials have said it malfunctioned and had to land.