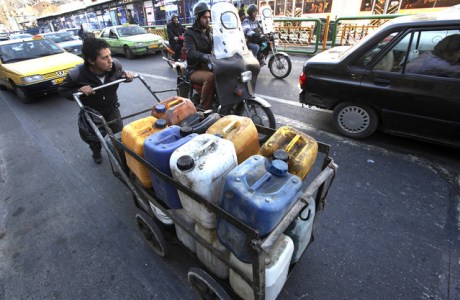 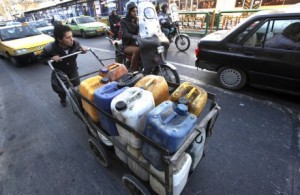 Iran faces a fresh obstacle to turning its most lucrative export into cash as the U.S. tightens sanctions this week to keep importers from paying for the oil with dollars and euros.

Under penalty of expulsion from the U.S. banking system, Iranian crude customers such as China, Japan and India will be restricted to using their own currencies for the purchases, starting today. Importers will be compelled to keep the payments in escrow accounts that Iran can use only for locally sourced goods and services, in what will amount to barter arrangements.

“They’ll have to accept that a lot of cash is piling up in banks in importing countries, and they’ll now have to look for ways to get it out,” said Robin Mills, the head of consulting at Dubai-based Manaar Energy Consulting & Project Management, in a Jan. 31 phone interview. “It’s making the trade much more difficult.”

Crude production and exports from Iran plunged in the past year as the U.S. and European Union sought to choke off money to the Islamic republic to dissuade it from pursuing a nuclear program. Today’s sanctions, part of U.S. legislation passed last year, may exacerbate the decline because it forces bartering with countries whose exports to Iran are in almost every case less than the amount of oil they buy from it.

Iran exported 1.2 million barrels of crude a day in December, with China, South Korea, Japan and India accounting for 84 percent, the International Energy Agency said in a Jan. 18 report. Sales were less than half of what Iran shipped on average during the first 10 months of 2011, IEA data show.

Sanctions enacted previously sought to isolate Iran’s banks and the scarcity of foreign exchange flowing into the economy has led to skyrocketing prices for consumer goods such as meat. The national currency has weakened over the last year, reaching 38,900 rials to the U.S. dollar in street trading yesterday compared with 16,900 in January 2012.

The new blockage on remittances will add to financial restrictions the U.S. imposed last year that curtail Iran’s access to dollars, euros and other hard currencies. Sanctions have already forced it into barter arrangements with China, its largest oil customer, Mahmoud Bahmani, Iran’s central bank governor, said a year ago.

Increased bartering is one way to counter the additional U.S. measures, Yahya Ale-Eshagh, head of the Tehran Chamber of Commerce, Industries and Mines, said yesterday.

“It’s time for private companies to act and take responsibility for actions the government is unable to carry out,” Ale-Eshagh told chamber members, according to the state- run Fars news agency. “A war is waged against Iran, so we should use all our potential, accept the costs and open the way for private companies.”

South Korean buyers have been paying for Iranian crude in local won, through two accounts that Iran’s central bank opened in 2010 at the Industrial Bank of Korea and Woori Bank.

Iran has made “precise” plans for increased imports of goods through barter, including the formation of a special committee to handle such trade, Fars reported yesterday, citing Deputy Commerce Minister Hamid Safdel. Iran previously sought to trade oil for wheat from Pakistan and Russia, media reports from the countries said.

“It’s getting more and more complicated every month,” Samuel Ciszuk, a consultant at KBC Energy Economics in Walton- on-Thames near London, said by telephone on Jan. 31. The new U.S. measures “will further cement the fact that Iran has to rely on a very small group of countries” for sales, he said.

The U.S. and allies say Iran’s nuclear program may lead to the development of atomic weapons, an allegation Iran denies, saying it wants energy for civilian use. The country will resume stalled discussions with the U.S. and five other powers later this month in Kazakhstan, Iranian Foreign Minister Ali Akbar Salehi said on Feb. 3. The EU said in a statement yesterday that Iran has agreed to talks starting Feb. 26.

Japan’s imports from Iran fell 38 percent, to $6.9 billion, last year, according to data from the Ministry of Finance. Its exports of mainly chemical and rubber products plunged 62 percent to $561 million, the data showed.

“Iran will probably have to continue oil exports to Japan and other countries because there is no other way,” Osamu Fujisawa, an independent oil economist who worked for Saudi Arabian Oil Co. and Royal Dutch Shell Plc, said yesterday from Tokyo. “This is not happy news for Iran.”

Inflation in the country accelerated to about 29 percent last month, up from 22 percent in May, according to the central bank. The International Monetary Fund predicts Iran’s economy will expand at a 0.8 percent rate this year compared with a 0.9 percent contraction in 2012.

South Korea’s exports to Iran of goods such as iron and steel products and petrochemicals increased 3.2 percent to $6.3 billion last year, while imports dropped 25 percent, to $8.5 billion, according to customs data. Oil made up 99 percent of the goods that Japan and South Korea imported from Iran.

India bought about $13.6 billion worth of products like oil, urea, and anhydrous ammonia from Iran in the year through March 2012, while Iran’s purchases of Indian goods like rice, sugar and soy bean oil extracts were worth about $2.4 billion.

The Persian Gulf state, formerly the second-biggest producer in the 12-member Organization of Petroleum Exporting Countries, has slipped to a fifth-place tie with the United Arab Emirates, according to data compiled by Bloomberg. It pumped 2.6 million barrels of crude a day last month, the data show. Iran’s OPEC Governor, Mohammad Ali Khatibi, couldn’t be reached for comment on the sanctions when called by Bloomberg this week. Saudi Arabia, Iraq, Venezuela and Kuwait all pump more.

The IEA said in December that Iran’s exports will probably decline to about 1 million barrels a day in January and remain near that level for months. Iran itself expects to export an estimated 1.5 million barrels a day in the Iranian year starting March 21, Gholamreza Kateb, a spokesman for the parliamentary planning and budget committee, said in comments reported by the state-run Iranian Students News Agency on Jan. 7.

Iran’s net oil export revenue dropped to $64 billion for the first 11 months of 2012, compared with $95 billion for all of 2011, according an estimate by the U.S. Energy Information Administration, an arm of the Energy Department.

Even so, the revenue Iran can generate from its current level of exports is probably enough to sustain its economy, said Olivier Jakob, managing director of consultants Petromatrix GmbH in Zug, Switzerland. With Brent crude, a benchmark for more than half of the world’s oil, selling at more than $110 a barrel, and Iranian prices at similar levels, the country doesn’t face immediate financial distress, he said Jan. 31 by phone.

“The amount of crude Iran exports at current prices is equivalent to exporting at full capacity with the price of $81 a barrel,” Jakob said. “As long as the oil flow isn’t stopped, Iran has time to work out the financial way around the new sanctions.” Brent crude traded at $116.27 a barrel at 11:05 a.m. today in London.

China, the biggest buyer of Iranian crude, believes that “dialogue and cooperation” are the only ways to settle differences over Iran’s nuclear program, Hua Chunying, a spokeswoman at the Foreign Ministry, said at a Feb. 4 news conference in Beijing.

“China’s trade relationship with Iran is normal and doesn’t affect any nation’s interest,” Hua said, without specifying how China might respond to the new sanctions.

India will start paying its entire bill for Iranian crude in rupees after March, when foreign-currency funds at a Turkish bank are exhausted, the Press Trust of India reported, citing an unnamed oil ministry official. An Indian state-run lender, UCO Bank, has also been acting as an intermediary for payments.

Indian refiners using Iranian crude are in talks with the oil ministry about the planned U.S. restrictions and will deposit their payments to Iran in rupees into an account at UCO Bank if the government makes such a request, according to a survey of three refinery officials at processors in the country. R.C. Joshi, a New Delhi-based spokesman for the ministry, said he couldn’t comment when reached on his mobile phone on Feb. 4.

The new U.S. measures will “narrow Iran’s abilities very dramatically to source goods and technologies of all kinds,” said Ciszuk of KBC Energy. “A lot of companies — particularly in South Korea, Japan and Turkey — will be apprehensive of dealing with Iran.”