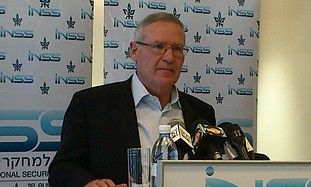 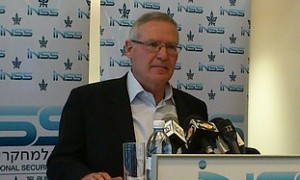 Israeli threats to strike Iran’s nuclear program and send shock waves throughout the world are “unhelpful,” and Jerusalem should lower its profile on the issue, director of the Institute for National Security Studies, Maj.-Gen. (res.) Amos Yadlin, said Monday.

Yadlin, a former Military Intelligence chief, spoke at the unveiling of the INSS’s strategic assessment for 2012-2013.

Yadlin stressed that a nuclear-armed Iran is more dangerous than an attack on the Islamic Republic.

He called on the government to “return to the international community,” and to better coordinate its position with the White House over Iran.

An understanding should be reached over the “required steps to stop Iran, and who will take them,” Yadlin said. “Israel does not need to object to a diplomatic solution, if it stops the [nuclear] clock.”

The key question, Yadlin argued, was how long it will take Iran to reach a nuclear breakout phase from the time it would violate a diplomatic agreement. If a couple of years separate Iran from nuclear breakout, that would be a better solution than a military attack, he said.

Iran is currently four to six months away from nuclear breakout stage, if an order is given to reach that phase now, Yadlin said. He envisaged a diplomatic solution that would allow Iran to possess 1,200 centrifuges.

If Israel did end up striking Iran’s nuclear program, a surgical attack that would carefully eliminate nuclear sites could enable Iran to respond in a limited manner, thereby avoiding a regional war, he argued.

Jerusalem should also better coordinate its position with Washington over the Palestinian issue, Yadlin said, adding that it was time for Israel to put forward a new diplomatic initiative.

Yadlin proposed a “fair offer, along the Clinton parameters, or the offer made by the Israeli government in 2008. We estimate that the Palestinians will reject our offer,” he said. “If that happens, Israel will be able to shape its own borders,” he added, referring to a unilateral step, but one which is based on lessons learned from errors committed in the 2005 Gaza disengagement.

That means maintaining an IDF presence in the Jordan Valley, to cut off weapons transfer points, unlike the abandonment of the Gaza-Egypt border, which allowed Hamas and Islamic Jihad to import large quantities of rockets after Israel left the Strip.

“We are facing an American administration that is maintaining a very good security-intelligence dialogue with us,” Yadlin said. “Better than ever before,” he added.

Israel should also seek to forge relationships with new Sunni powers, and work with them to isolate “the big enemy, which is Iran,” Yadlin said.

Israel’s deterrence is strong, and “the IDF is the strongest military in the Middle East,” he added.

Syria will be busy with rebuilding itself in the coming years, he assessed. The fact that Syria – a major component of the Iranian-led regional axis – has been badly damaged has resulted in a benefit for Israel’s strategic standing, Yadlin said.

“All of this is conditioned on renewing the diplomatic process with the Palestinians,” he stressed.

Yadlin said Israel should seek to contain small incidents along the borders, and “not let small organizations drag us into war.”

“If there will be a war-type development in 2013… it will be in our hands,” Yadlin said. He called on the government to be “more active” in pursuing these goals.

Turning his attention to the reported air strikes in Syria, Yadlin said that if Syria admitted it had attempted to transfer SA-17 anti-aircraft missiles to Hezbollah, it would be admitting to breaking a pledge made to Russia to refrain from such proliferation.