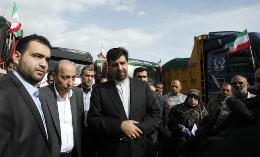 The 34th anniversary of the Iranian revolution comes amid increased pressure on Iran and its allies, particularly Syria. It also coincides with the emergence of new indications — most notably the positive sign given by US Vice President Joe Biden’s offer of direct talks between the Iranians and Americans over the Iranian nuclear program. His offer was met by a positive response from the Iranians through Minister of Foreign Affairs Ali Akbar Salehi.

Ghazanfar Ruknabadi, the Iranian ambassador to Lebanon, is keen on maintaining good relations with all Lebanese parties. He provokes, challenges and defies only “the Zionist enemy.” Armed with exceptional patience, he downplays contentious issues with all countries, parties and individuals. He hails from the city of Qom, famous for its hawzas, as well as for its Persian carpets that requires years of weaving. This explains the open-mindedness and patience of the city’s residents, most notable of whom is Imam Khomeini.

In an interview with As-Safir, Ruknabadi reiterated Iran’s support for reform in Syria.

He said: “Since the beginning of the crisis, we said that the majority of the people want reforms led by President Bashar al-Assad, and that Iran supports this demand. However, we also said that there is a US-Zionist project that aims to overthrow the regime in Syria, because it is a resistant and defiant regime in the face of the Israeli occupation. We have emphasized this position for two years. The direct Israeli involvement in Syria [the recent raid] reflects despair over the possibility of the armed groups in Syria making any progress. Israeli aggression best proves that they seek the downfall of Syria, its people, government and leadership to weaken the resistance front.”

Following the Israeli strike, questions were raised about the defense agreements between Iran and Syria, including whether these agreements could be implemented in the event of a tougher strike on Syria, and whether Iran would get involved in a regional war.

Ruknabadi answered: “The Israelis should anticipate the consequence of the major sin they committed in Jamraya before considering other initiatives.”

What is the Iranian position on this? He replied, “We maintain that Syria is not like other countries, but is an essential pillar of the resistance. They [the Israelis] must take this into account.”

Regarding Iran’s view of the role of Hezbollah during this difficult stage for Syria, especially amid increasing talk about the entry of extremists into Lebanese territory, Ruknabadi said: “All our attention and capabilities are directed towards the Israeli enemy, and we only focus on this enemy. We also support the resistance and reinforce its potential and capabilities to confront it.”

As for the domestic adversaries of the resistance, he said: “Internally, we call on all parties to resolve their differences and unite. And I reiterate that we only know one enemy, the Zionist enemy.”

He added: “We are doing all we can to reduce sectarian and confessional strife. Since the time of the victory of the revolution through today, we in Iran have established several centers that aim to bring sects closer, and promote Islamic-Christian dialogue. We will continue this approach until we unite, and unify everyone against the Israeli occupation. We have great hope to unite all parties here in Lebanon against the Israeli project.”

On whether the circumstances for a settlement in Syria are maturing in light of the Munich meetings, Ruknabadi said: “We have always said that a doctor who cannot diagnose the disease cannot provide a treatment. Each party has a role in solving this problem. Since the beginning, we have stressed the pointlessness of military clashes, and the need to move toward a political solution. Gradually, everyone started to realize that what we said was right — the uselessness of military operations and need to move toward a political solution. This was especially true after the visit of United Nations Secretary-General Ban-Ki Moon to Tehran and his meeting with Iranian officials, who assured him that Iran is part of the solution and can be of help. The same goes for UN envoy Lakhdar Brahimi, who was also confirmed that Iran is ready to do all it can to reach a solution in Syria, especially a political solution.”

Ruknabadi added: “Accordingly, we are beginning to hear that many international parties are moving towards a political solution and are seeking to benefit from Iran’s experiences to resolve the crisis in Syria, especially since the armed clashes have reached a dead end.”

As for the Islamic Summit in Cairo, in which Iranian President Mahmoud Ahmadinejad will take part, Ruknabadi said: “The Islamic Summit will address several issues happening in the world. A major responsibility rests on the participants, especially the leaders of these countries. We hope that the summit will not only issue statements, but take practical decisions to help countries in crisis to solve their problems.”

In response to a question about the impact of the decline of the Syrian role in Lebanon on bilateral relations between Lebanon and Iran, Ruknabadi said: “We look at things from the perspective of bringing all parties closer, seek the cooperation and convergence of all countries of the region, and focus on solving problems in this region. Iran is not seeking for a role in any country or region in the world. The overarching goal is achieving justice in the world, and in order to reach this goal, we are taking advantage of all legitimate means.”

Regarding Iranian aid to Lebanon, he said, “All the offers made by Iran still stand: the offer to supply Lebanon with electricity through high voltage lines, and the construction of dams and others. We addressed all the technical barriers in Iraq and Syria, thus Iranian electrical power reached the Syrian-Lebanese border. We hope to overcome the formalities in Lebanon as soon as possible in order to begin the transmission of electricity. The Iranian side is following up on issues, and there is no problem on our part.” Rukanabadi referred to the Bal’a dam, saying: “After the signing of the executive agreement, the preliminary stage to start implementing the project has begun.”

There are 32 agreements and memoranda of understanding signed between Iran and Lebanon, which range from oil and gas drilling projects by Iranian companies to the reparation of the power grid and stations.

“Several Iranian companies have made tenders in this regard, and we are waiting for a reply from the Lebanese government. We are always willing to help, as there are agreements between the two countries covering all fields. We have announced our readiness to implement immediately once we are given the starting signal. We have allocated money to the Lebanese government, including a loan worth $100 million — allocated by Iran — which has been frozen since 2003 and has still not been used. Also, $450 million has been allocated to power generation projects.”

The Iranian ambassador explained Lebanon’s failure and delay in accepting Iran’s donations in politics saying, “This is our duty. We have principles, and it is our duty to offer [donations] and continue this approach.”

As for talk that the Gulf states will not allow Iran to assume a leading role in Lebanon, Ruknabadi said: “We do not seek any leading role in any region in the world, not in Lebanon nor in other countries. All we want is to achieve justice.”

In conclusion, Ruknabadi said that the 34th anniversary of the victory of the Islamic Revolution “comes at a time when Iran is stronger and is reinforcing its strength every year. This year, we made major achievements in different directions. Most recently, we sent monkeys into space at a distance of 120 kilometers [75 miles]. We also announced that we will send the first man from Iran into space before 2020. We have taken great strides in nanotechnology, industry, aircraft, submarines and ships, the latest of which is the anti-radar military aircraft Qahir 313. Iran is also self-sufficient in all areas, in the production and export of wheat. Despite the pressures, blockade and sanctions, the Iranian people adhere to their principles, and cannot back down one iota. Everyone in Iran agrees on this issue.”