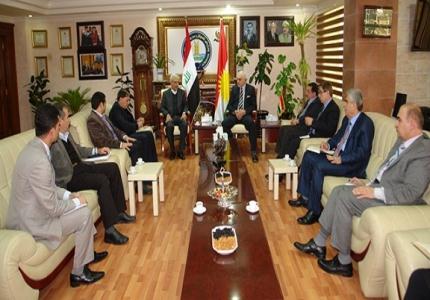 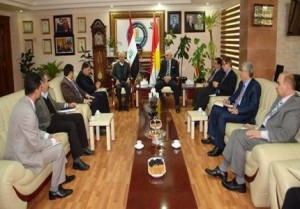 Arbil- The Kurdistan Regional Government (KRG) and Islamic Republic of Iran decided on Friday to extend their ties.

During an Iranian economic delegation meeting with KRG agriculture and electricity officials, the two sides agreed on boosting ties.

The Iranian delegation, headed by Iran- Iraq Economic Extension Staff Deputy, Amin Shariati, discussed relations between Arbil and Tehran in the fields of electricity and agriculture.

KRG electricity Minister, Abdullah Saleh, attended in the meeting, expressed his hope for enhancing energy cooperation between Kurdistan Region and Iran and said hopes ties between the two sides would increase in comparison to 2012.

Saleh voiced KRG readiness to provide facilities for the presence of Iranian companies in the northern region’s energy affairs.

Shariati also discussed agriculture relations in a separate meeting with KRG Agriculture and Water Minister Sirwan Baban and said Tehran is ready to improve ties with the region in the fields.

The Iranian delegation invited Kurdistan Region’s agriculture ministry to visit Iran in order to get a better understanding of Iran’s improvements in the field.

Baban, for his part, called the visit an opportunity to extend ties in agriculture and water fields.