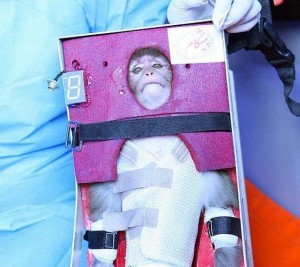 TEHRAN, Iran (AP) — A senior Iranian space official says one of two official photos of its famed simian space traveler depicted the wrong monkey, but that the primate really did fly up into orbit and return safely.

Mohammad Ebrahimi also told the The Associated Press the monkey’s name: Pishgam, or Pioneer in Farsi. The Iranian media originally said that the “Pishgam” was the rocket which reportedly took him Monday into space and returned him to earth after 20 minutes.

Ebrahimi said Saturday that photos of two different monkeys were released by the Iranian media. One was an archive photo of a backup monkey.

Iran says it is working toward manned space flight. The U.S. and its allies worry that the technology could also be used to develop long-range missiles.