Iran military might not a threat to other countries: Iran cmdr. 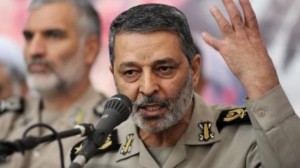 The Second-in-Command of the Iranian Army Brigadier General Abdolrahim Mousavi says the Islamic Republic’s military might is not a threat to other countries.

“Iran’s military power and capability is not a threat to any country except to aggressor countries,” Mousavi said on Saturday.

The commander added that by relying on valuable experiences gained during past three decades, particularly during the war with Iraq, the Islamic Republic’s armed forces are ready to defend the country against the aggressors with all their might.

The newly-unveiled Iranian military aircraft is said to be similar to the US-built F/A-18, although its appearance is like F-5E/F Tiger II.

Iran’s Defense Ministry plans to unveil a number of military achievements during the Ten-Day Dawn celebrations which mark the anniversary of the Islamic Revolution in 1979.

Tehran has repeatedly announced that its military might poses no threat to other countries, insisting that the Islamic Republic’s defense doctrine is entirely based on deterrence.