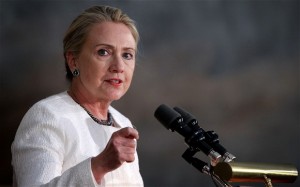 Jan 31 (Reuters) – The window for negotiations with Iran about its nuclear program cannot stay open for “too much longer,” outgoing U.S. Secretary of State Hillary Clinton said on Thursday but she declined to provide a deadline.

“I don’t think the window can remain open for too much longer (but) I am not going to put days, weeks or months on it,” Clinton told a small group of reporters on the eve of her departure from the State Department.

The United States and its Western allies suspect that Iran is using its civilian nuclear program as a cover to develop a bomb. Iran denies this, saying its program is for peaceful purposes such as generating electricity and medical isotopes.

Iran has refused to set a date and venue for fresh talks with six major powers on its nuclear program, a reluctance that Clinton ascribed to “a lot of disagreement within the highest levels of the regime about how to handle this” as well as to political jockeying ahead of Iran’s June presidential election.

“They will decide to meet or not to meet based on their own internal calculations,” Clinton said. “They have an election coming up in June. People are jockeying to see who the supreme leader is going to anoint to be the next president.

“They are preoccupied with their internal political calculations and that’s far more important to them right now than setting a date and a time” to meet the six major powers: Britain, China, France, Germany, Russia and the United States.

Clinton, who is to be replaced by Senator John Kerry on Friday, said President Barack Obama had never given up on the idea of engaging Iran but she stressed this was only one side of its dual-track policy with economic sanctions as the other.

Clinton played down a report that Iran’s crude oil exports rose in December to their highest level since a European Union embargo kicked in in July, saying “it’s been our experience that you can’t take any monthly number at face value.”

“Their exports have fallen dramatically to a point where they are seeking any way around the sanctions and not having the kind of receptivity that they were hoping for,” she added, saying she was satisfied with other nations’ “general compliance” with the sanctions.

The United States believes that Iran’s possession of nuclear weapons could spark a regional arms race as well as embolden Tehran in its dealings with its neighbors and in what Washington says is its support for terrorist groups around the world.

U.S. officials believe it would also endanger Israel, a U.S. ally which sees an Iranian atomic bomb as an existential threat.

During a speech at the United Nations in September, Israeli Prime Minister Benjamin Netanyahu said Iran will have acquired enough highly enriched uranium to build a nuclear weapon at some point this year, possibly as early as the spring or summer.

Clinton would not be drawn on exactly how much time might be left for negotiations and she repeated the U.S. view that “all options are on the table” – diplomatic code for the possibility of a military strike against Iran.

“Our policy is prevention, not containment, and all the options remain on the table and at some point the window for engagement has to close,” she said.

Pressed on the view expressed by many analysts, as well as some Israeli officials, that the issue will come to a head this year, Clinton demurred.

“The United States is not going to say that. There is no reason to,” she said. “Constructive ambiguity is a clear benefit in a lot of what we do.”