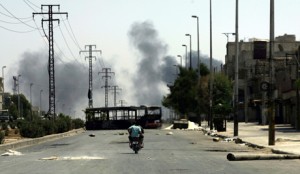 (Reuters) – U.S. Secretary of State Hillary Clinton urged Iran and Russia on Thursday to rethink their support for Syria, saying the most dire scenarios of the conflict spilling beyond its borders could come to pass.

Clinton told reporters there are signs Iran is sending more people and increasingly sophisticated weaponry to support Syrian President Bashar al-Assad in his 22-month battle against rebels seeking to end his family’s four-decades of authoritarian rule.

Speaking on the eve of her State Department departure, Clinton also said Russia continues aid to the Syrian government, including financially, and she appeared skeptical that Moscow was easing in its opposition to Assad’s departure.

Clinton declined comment on reports Israel had bombed Syria on Wednesday but she voiced fears that the conflict, in which more than 60,000 people are believed to have died, may worsen internally and spread.

“I personally have been warning for quite some time of the dangers associated with an increasingly lethal civil war and a potential proxy war,” Clinton told a small group of reporters a day before she is to be replaced by Senator John Kerry.

“Therefore, I think it’s incumbent on those nations that have refused to be constructive players to reconsider their positions because the worst kind of predictions of what could happen internally and spilling over the borders of Syria are certainly within the realm of the possible now,” she added.

Diplomats, Syrian rebels and security sources said Israeli jets bombed a convoy near the Lebanese border on Wednesday, apparently hitting weapons destined for Hezbollah. Syria denied the reports, saying the target was a military research center northwest of Damascus and 8 miles from the border.

Syria warned of a possible “surprise” response to Israel over the reported attack while Hezbollah, an Iranian ally that also supports Assad, said Israel was trying to thwart Arab military power and vowed to stand by its ally.

Clinton said that the United States was worried that Iran had recently increased its support for Assad.

“It appears that they may be increasing that involvement and that is a matter of great concern to us,” she said.

“I think the numbers (of people) have increased,” she added. “There is a lot of concern that they are increasing the quality of the weapons, because Assad is using up his weaponry. So it’s numbers and it’s materiel.”

She made similar comments about Russia.

“We have reason to believe that the Russians continue to supply financial and military assistance in the form of equipment,” she said. “They are doing it in the recent past.”

Russia has been Assad’s most important ally throughout the 22-month-old Syrian conflict, which began with peaceful street protests and evolved into an armed uprising against his rule.

Moscow has blocked three Security Council resolutions aimed at pushing him out or pressuring him to end the bloodshed. But Russia has also distanced itself from Assad by saying it is not trying to prop him up and will not offer him asylum.

“On the Russians, Medvedev included, we have heard rhetoric before over the last now nearly two years that we thought provided an opening … unfortunately, all of that rhetoric has failed to translate into changes in Russian policy,” she said.

Clinton praised the head of Syria’s main opposition coalition, Mouaz Alkhatib, for saying this week that he was ready to hold talks with Assad representatives outside Syria if authorities released tens of thousands of detainees.

“I thought he was not only courageous but smart in saying that if certain conditions are met we will begin discussing a political transition because you have to you know make it clear that there will be something other than hardened fighters when this conflict finally ends,” Clinton said. “Otherwise, it might not ever end in the foreseeable future.”