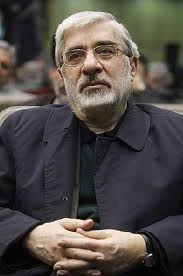 Iran’s reformers transformed revolutionary politics between 1997 and 2005 under former President Mohammed Khatami. But today, the reformists’ ability to contest the presidential elections in any meaningful way appears slim. Conservatives have even taken to labeling them the “seditionist current,” despite the fact that most were among the original revolutionaries.

As yet, the reformists have a fundamental problem—no viable candidate. Khatami will not run again, even though he technically could. Mir Hossein Mousavi and Mehdi Karroubi (left)—a former prime minister and former speaker of parliament—remain under house arrest for their leadership of the opposition Green Movement after the disputed 2009 election. Mohammad Reza Aref, Khatami’s former vice-president, has reportedly considered running. But the obstacles are formidable for reformists.

The reformist bloc has also issued tough conditions for their participation in the elections—and not to call for a boycott that might discredit the vote both at home and abroad. They demanded release of their leaders and other political prisoners. They also called for guarantees that the poll will be free and transparent. Neither demand is likely to be met.
The main reformist political parties have been proscribed by the ministry of interior, although they continue to have a shadowy existence. A congress of all reformist parties and groups was slated for mid-January to discuss election strategy, but it was called off after the authorities effectively banned the meeting by imposing onerous demands on the organizers. The regime required that they renounce Mousavi, Karroubi and the Green Movement and admit no members of reformist parties to the meeting.
Leading conservatives—including Majles deputies, senior clerics and Revolutionary Guards commanders—have increasingly denounced the reformist movement, its leaders and others who took part in the 2009 protests. Charges against reformists have become so serious that Reza Khatami, the former president’s brother and spokesman for his political party, had to publicly deny that the reformists want to overthrow the regime.
Their aim is to reform, not to “overthrow” the government, the younger Khatami said. If reform proves impossible, he added, the reformists will simply go home and tend to their own business.
Akbar Hashemi Rafsanjani, the former president and grand old man of Iranian politics, had earlier proposed a “coalition government” of all parties to address the country’s problems—a proposal promptly denounced by conservatives. They charged that it provided a back-door for reformers to return to power.
Rafsanjani appears to be quietly urging Khamenei to embrace a compromise solution to Iran’s current political dilemma. He also has not yet ruled out another bid for the presidency himself. Theoretically, he could run. Parliament tried to bar candidates over age 75 from running—a move clearly aimed at Rafsanjani, who is 78—but the Council of Guardians failed to endorse the bill. The council, composed of 12 senior clerics and religious scholars, has veto power over legislative proposals. At a press conference in late January, Rafsanjani denied that he had any intention of running again. (He was president for two terms from 1989 to 1997, then lost to Ahmadinejad in 2009.) But he then added that he “would not hesitate for a second to enter the arena” if he felt he was needed.
A few conservative leaders have also tried to repair the deep divide among factions that emerged from among the original revolutionaries, but so far to no avail. Habibollah Asghar-Owladi, a powerful conservative parliamentarian with close ties to the bazaar and business community, recently said that Mousavi and Karroubi were not leaders of the “seditious current,” even if they had been involved with it. He implied that the two could be returned to the fold.
But within two weeks, Asghar-Owladi was forced to retract his overture. He did not mean to exonerate the two reformists, he insisted. They still had to made amends for their sins.
The Friday prayer leader in Mashhad, who is a Khamenei appointee, also tried to open the door to reconciliation with Mousavi and Karroubi. He was soon pressured into an even more compliant retraction. The two reformist leaders should be put on trial, he said.
Even moderate conservatives now insist that any reformists who want to return to the “embrace” of the revolution must first “apologize” and “ask forgiveness” for their past transgressions. The reformists must also distance themselves from other “seditionists.” A senior Revolutionary Guards commander recently described the 2009 protests as a greater threat to the Islamic Republic than the eight-year war with Iraq in the 1980s.  Ayatollah Ahmad Jannati, head of the Council of Guardians, has also said that the so-called seditionists “should not even dream” of running for president.
Debate about the detained reformist leaders may not be over, however. In late January 2013, Speaker of Parliament Ali Larijani repeated Ashgar-Owladi’s formulation that Mousavi and Karroubi could indeed return to the fold if they apologized. The comment from Larijani, a potential presidential candidate, may indicate that moderate conservatives—and perhaps even the supreme leader—hope to avoid another tainted election by freeing the opposition leaders. But any release appears to be conditioned on political submission—and public proof that Mousavi and Karroubi have been tamed and humiliated.
Under these conditions, major politicians from the reformist camp are unlikely to run in the coming elections. Voters are more likely to have to choose from conservative candidates and possibly a candidate from the Ahmadinejad camp, if one is allowed to run. At the same time, little-known dark horses have emerged in past elections—and taken Iran in unexpected directions.
Read Part I – Pivotal Election: The Conservatives

This article was written by Shaul Bakhash for the Iran Primer on Wednesday January 30, 2013. Shaul Bakhash is the Clarence Robinson Professor of History at George Mason University.