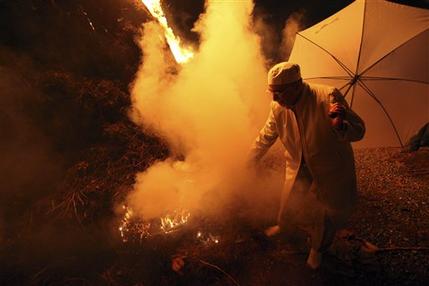 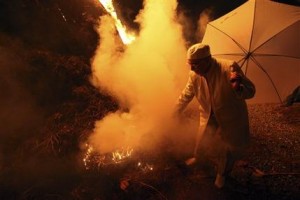 Zoroastrian priests, dressed in white to symbolize purity, recited verses from Avesta, the holy Zoroastrian book, before more than 2,000 people on Tuesday.

Men and women in traditional dress carried torches and lit a huge bonfire on the outskirts of Tehran Tuesday, as young people danced.

Sadeh, the feast of creation of fire, has been observed since ancient days, when Zoroastrianism was the dominant religion in the powerful Persian empire.

Zoroastrianism lost dominance after Muslim Arabs invaded and conquered Persia in the seventh century. Today, most of Iran’s 75 million people are Shiite Muslims, and the ruling establishment is led by clerics who preach a strict version of Islam.

After the 1979 revolution brought in the hard-line Islamic religious government, many Zoroastrians emigrated to the U.S., and their festivals were strongly discouraged.

Although the feast of fire has traditionally been marked by Zoroastrians, many Muslim Iranians joined the festival Tuesday.

“This festival promotes friendship and happiness. The feast is an opportunity to thank God for the creation of fire. The light and warmth of fire brings affection among communities. That’s the reason we are here,” Zoroastrian priest Sohrab Hengami said.

Ali Doosti, an Iranian Muslim who attended Tuesday’s celebration, said Sadeh should not been seen from a purely religious perspective.

“Sadeh is an ancient celebration that symbolizes Iran’s rich cultural heritage. There is no reason why Iranian Muslims shouldn’t observe the event,” he said.

“Sadeh is a celebration of fire, but we are not fire worshippers. We worship one God,” said Ardeshir Khorshidian, another priest.

Fire plays a central role in worship as a symbol of truth and the spirit of God. Prayer is often performed in front of a fire, and consecrated fires are kept perpetually burning in major temples.