A tale of Iran, Syria and a busy oil tanker 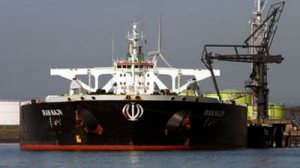 Although sanctions have forced Iran to cut back dramatically on its shipping traffic, some Iranian-linked vessels continue to slip through the net. For a brazen example, take the case of an Iranian-flagged oil tanker named the Tour 2, currently off Cyprus, which earlier this month paid a call at the Syrian port of Tartous.

The Tour 2 is not on the U.S. sanctions list, though if sanctions are to be the U.S. tool of choice for dealing with Syria and Iran, the Tour 2 comes with a record that should transfix any dedicated sanctions enforcer. Over the past year, it has made at least three circuits between U.S.-sanctioned Iran and U.S.-sanctioned Syria, calling at Syria last March, July and just this month.

These trips appear to be part of Iran’s effort to bolster Syria’s regime against the uprising in which more than 60,000 people so far have died. While Iran’s Islamic Revolutionary Guard Corps has abetted the Assad regime in the killing, Iranian-controlled tankers have helped the Syrian regime defy U.S. and European Union embargoes on its oil sales by sending ships to pick up Syrian crude, for onward sale that benefits Iran’s embattled ally, President Bashar Assad. The Tour 2 has been one of these ships.

The Tour 2 has also put on a rich display of what Treasury has described in similar Iran-linked cases as “deceptive practices.” While it is not unusual for ships to change names and flags, the Tour 2 has gone noticeably beyond the norm. Since 2011, this tanker has sailed under three slightly varied names, and four different flags, including Malta, Bolivia, Sierra Leone and Togo, before reverting just a few weeks ago, by at least one account, to its original flag — Iran. It has also had at least three shell company owners in three different countries over the past year, at least two of those visibly linked to Iran.

Fortunately, the ship itself can be tracked by way of its IMO number, the unique hull number issued to every major vessel under rules of the International Maritime Organization. This makes it easier to keep an eye on the actual tanker, despite the razzle-dazzle of changing flags and owners. For the Tour 2, the IMO number is 9364112, and the following account of its pedigree is based on ship-tracking data from two highly-respected ship-tracking services, Lloyd’s List Intelligence and Equasis; as well as records of various corporate and shipping registries, public findings of the U.S. Treasury, documents of the United Nations and stories that have riffled through the international press.

The Tour 2 was built in South Korea, and set sail in 2007 under the name of the Tour (without the 2), flagged to Iran. At that time, the UN had already begun imposing sanctions on Iran, and the U.S. was talking about sanctioning Iran’s merchant fleet. Preemptively, Iran began camouflaging its fleet, setting up shell company owners abroad, and reflagging many of its ships to places such as Malta, Cyprus and Hong Kong. The Tour was reflagged to Malta, listed on the shipping register there as the ISIM Tour, owned by a Malta-based company.

In September, 2008, the U.S. announced sanctions on the Islamic Republic of Iran Shipping Lines, or IRISL. The U.S. Treasury blacklisted scores of ships for alleged links to IRISL, which Washington has accused of “involvement in Iran’s efforts to advance its missile programs and transport military cargoes.”

The ISIM Tour — for simplicity’s sake, let’s call it the Tour, which it again became in 2012 — did not appear on the lengthy and growing U.S. blacklist. But eventually, its Maltese owner did. In December, 2011, the U.S. Treasury sanctioned 10 companies based in Malta, alleging that they were “front companies” affiliated with IRISL. One of those alleged fronts for IRISL was called ISIM Tour Limited, listed in the Maltese shipping register at the time as “sole owner” of the Tour. This front company was part of a nest of Maltese-based companies owned by the U.S.-sanctioned Irano Hind Shipping Company, a decades-old joint venture between IRISL and the Shipping Corporation of India.

A few months after the Tour’s Maltese owner landed on the U.S. sanctions list, the ship itself made news. In late March, 2012, Reuters reported that Iran was helping the Assad regime in Syria defy western sanctions “by providing a vessel to ship Syrian oil.” The vessel was the Tour, which, as Reuters further reported in early April, then sailed back through Egypt’s Suez Canal, carrying a load of Syrian crude. During its trip, the Tour reflagged from Malta to Bolivia — a landlocked nation more widely known for its friendly ties to Iran than for its maritime presence.

By mid-2012, the Tour had achieved the distinction of being named in a June 12 report to the U.N. Security Council by the U.N. Panel of Experts on Iran sanctions. The Panel noted that the Irano Hind Shipping Company had been sanctioned by the UN, which required that U.N. member states freeze Irano Hind’s assets. Nonetheless, the Panel reported, “Its vessels are continuing to operate, which raises questions regarding the practical impact of this designation.”

Speculating that member states might be having trouble identifying Irano Hind ships, the U.N. experts provided a crib sheet in an annex to their report, listing eight Irano Hind-controlled vessels. The list included the Tour, identified not only by name but by IMO number.

Shortly after that report, the Shipping Corporation of India announced the dissolution of its Irano Hind joint venture with Iran, saying there would be a division of assets. The Tour has been shuffled around over the past year among flags and names and nominal owners to such an extent that shipping databases don’t quite agree on some of the details, But it appears, not least from the Tour’s most recent shuttle from Iran to Syria, that this tanker has remained in the service of Iran.

According to Lloyd’s List Intelligence, the Tour was acquired last March by a Marshall Islands corporation called Auris Marine Company Limited, still listed by Lloyd’s as its last known owner. But the Marshall Islands international corporate registry — which is actually based in Reston, Virginia — provides an online database that shows Auris Marine as having been incorporated on March 7, 2012, and annulled less than three weeks later.

On the Equasis database, there is also an Auris Marine listed as the owner of the Tour since May, 2012. This appears to be a different Auris Marine, registered not in the Marshall Islands, but in Belize. On the IMO database of ship-owning companies, this Belize-based Auris Marine has an address care of IranoHind Shipping in Tehran. In November, The Wall Street Journal reported that Belize authorities had said they were taking steps to have the company struck off their register.

Both Lloyd’s and Equasis show that since last April, the Tour has been reflagged from Bolivia, to Sierra Leone, to Togo. Equasis shows the tanker as having reflagged about four weeks ago to Iran. Lloyd’s shows it as currently sailing under an unknown flag, but sending live signals as recently as this week, which identify it as still flagged to Togo. Both ship-tracking services show that sometime last month, the Tour’s name was changed, none too subtly, to the Tour 2.

Through all this naming, shaming, reflagging and renaming, the Tour (now the Tour 2) has sailed on, making its runs between Syria and Iran. So have a series of other Iranian-controlled ships, including the Amin 2, formerly the Amin, a tanker which has matched the Tour’s kaleidoscope of flags and fronts, and is also listed on Equasis as owned by Belize-based Auris Marine, care of Tehran.

Unlike the Tour (or Tour 2), the Amin (or Amin 2) was blacklisted last year by the U.S. Asked why the difference, a Treasury official said that whether an IRISL ship is on the U.S. sanctions list or not, “We encourage members of the maritime community to exert enhanced due diligence when dealing with possible Iranian vessels.” So, as the carnage continues in Syria, and Iranian ships keep dropping by, what comes next?