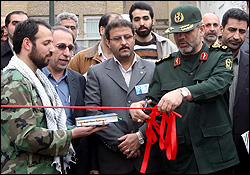 The “Ya Zahra” system has the ability to identify, target, and destroy kinds of planes, helicopters, and drones, Vahidi said.

The Mersad system is also equipped with sophisticated radar signal processing technology, an advanced launcher, and electronic equipment for guidance and target acquisition.

Iran is now among the world’s top five countries in terms of diversified defense systems, he noted.